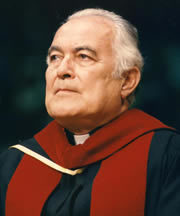 Rev. Theodore M. Hesburgh, C.S.C., president emeritus of the University of Notre Dame, will receive the Sachem, which recognizes a lifetime of excellence and virtue, at11:30 a.m.Tuesday (March 7) at the Indiana Statehouse.

Created more than three decades ago by former Indiana Gov. Edgar J. Whitcomb, then discontinued following his term, the Sachem was considered a higher honor than the Sagamore of theWabash.Gov. Mitch Daniels brought back the Sachem last year and returned it to its status as the states highest honor.The awards name comes from the Algonquin term applied to village leaders, implying wisdom, judgment and grace.

Father Hesburgh, 88, and college basketball coaching legend John Wooden (the 2005 honoree) are the inaugural recipients of the new Sachem.

Notre Dames president from 1952 to 1987, Father Hesburgh has played an active and influential role in national and international affairs over the past half century. He has held 16 presidential appointments that involved him in virtually all major social issuesincluding civil rights, peaceful uses of atomic energy, campus unrest, treatment of Vietnam offenders, and Third World development and immigration reform. Justice was the focus of many of his outside involvements. Perhaps most notably, he was appointed a charter member of the U.S. Commission on Civil Rights in 1957 and chaired it from 1969 to 1972, when President Nixon replaced him because of his criticism of the administration’s civil rights record.

Father Hesburgh is the recipient of 150 honorary degrees, the most ever awarded to one person.He was awarded the Congressional Gold Medal, the highest honor presented by the U.S. Congress, in 2000, and was honored in 1964 with the Medal of Freedom, the nations highest civilian honor.