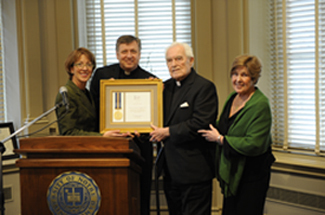 “We honor a man not only deeply admired and respected in this country, but around the world," said Rev. Larry Snyder, president and CEO of CCUSA. “Father Hesburgh’s life has been one of devotion to education and service to his church – exemplified by his unparalleled 35 years as president of Notre Dame. Also, his dedication to our nation is largely without equal, serving on 16 presidential commissions, including the Civil Rights Commission. Few are of his caliber.”

“Our Centennial Medal is the most prestigious symbol of Catholic Charities’ first 100 years, and Father Hesburgh is a person who perfectly embodies the spirit and the meaning of all that we stand for,” said Kathleen Flynn Fox, CCUSA Board member and emcee of the ceremony. “Not only has Father Hesburgh been a remarkable academic and religious leader for many years, but he truly is a great American who we warmly honor with this medal.”

Catholic Charities presented special Centennial Awards to 100 recipients throughout 2010 for their contributions to the reduction of poverty in the United States and an extraordinary commitment to the vision and mission of CCUSA. In a fall 2010 ceremony, the organization presented medals to Notre Dame recipients Rev. Daniel Groody, C.S.C., associate professor of theology; Thomas Harvey, Luke McGuinness Director of Nonprofit Professional Development; Notre Dame’s Alliance for Catholic Education (ACE) program and the Mendoza College of Business. Father Hesburgh was traveling and unable to attend the event.

CCUSA’s members provide help and create hope for more than 9 million people a year regardless of religious, social or economic backgrounds. For almost 300 years, Catholic Charities agencies have worked to reduce poverty by providing a myriad of vital services in their communities, ranging from health care and job training to food and housing. In 2010, CCUSA celebrated its centennial anniversary and introduced new federal legislation – the National Opportunity and Community Renewal Act (NOCRA) – to transform the nation’s approach to poverty.