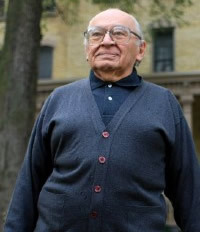 “Gustavo Gutiérrez’ influence on the last 40 years of Catholic theology has been profound and fundamental,” said John C. Cavadini, director of Notre Dame’s Institute for Church Life (ICL). “He has nurtured two generations of Catholic theologians on the idea and meaning of the preferential option of the poor, so much so that the idea has appeared in the encyclicals and apostolic exhortations of the last two popes, in the Compendium of Catholic Social Teaching, and in the imagination of almost any person of faith who has meditated seriously on the place of the poor in the economy of salvation proclaimed in the Bible. I can’t think of anyone whose witness has been more consistent, or influence more fundamental, among any living theologians.”

Father Gutiérrez, a member of the Notre Dame faculty since 2001, is widely credited as the author of the foundational text for liberation theology, “A Theology of Liberation.” The movement launched by his work grew rapidly in a Latin America plagued by the military dictatorships of the 1960s and 1970s and became one of the most influential in contemporary theology by calling attention to the Church’s vocation to resist the oppression of the poor.

Other books Father Gutiérrez has written, which similarly concern theology, spirituality and Latin American history, include “We Drink From Our Own Wells: The Spiritual Journey of a People,” “On Job: God-Talk and the Suffering of the Innocent,” “The Truth Shall Make You Free,” “The God of Life,” and “Las Casas: In Search of the Poor of Jesus Christ.”

Last month, Father Gutiérrez went to Rome for what the Vatican described as “a strictly private visit” with Pope Francis. The event was nevertheless reported by L’Osservatore Romano, the Vatican’s semi-official newspaper, in a story that included the observation that the election of a pope from Latin America has brought liberation theology out of “the shadows to which it has been relegated for some years, at least in Europe.”

The Human Dignity lectures are sponsored by the University Life Initiatives, a collaborative effort of the ICL and Notre Dame’s Office of the President.