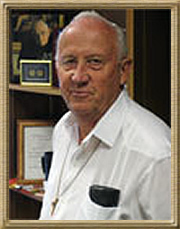 In January, Rev. Robert S. Pelton, C.S.C., led a luxurious tour of the Yucatan Peninsula sponsored by the Notre Dame Alumni Association. The alumni tourists, some 35 people of a certain age, loved every minute of it, as did their host, a boundlessly energetic Holy Cross priest and 1945 Notre Dame alumnus of the redoubtably certain age of 84.

“One of the nicest things about that trip,” Father Pelton recalls, “is that many of our group were married couples who were vacationing without children and grandchildren for the first time in their lives. You could see them getting to know each other again and renewing their vows. It was delightful.”

In addition to these delights, the archeological marvels of ancient Mayan civilization, the architectural splendors of colonial Mérida, and the natural beauty of the Mexican tropics, Father Pelton wanted to be sure his companions encountered another Yucatan treasure especially dear to him. Accordingly, on their way to enjoy the Celestún Estuary and to admire the vibrant plumage of the only flamingo settlement in North America, the tourists stopped to visit a few Mayan homes and the children of a village primary school and to hear about the life and struggles of the Catholic Church in the region from Monsenor Fernando Sacramento, a priest of the Mérida archdiocese.

Father Pelton is no stranger to the people and churches of Latin America. He lived in Chile during the 1960s and 70s, serving as rector of St. Georges College, an elementary and secondary school administered by the Congregation of Holy Cross; as a member of the theology faculty of the Catholic University of Chile; and in various administrative posts in the Santiago archdiocese. He visited Central and South America frequently in subsequent years as a freelance journalist covering the visits of Pope John Paul II and the regional conferences of Catholic bishops.

His theological affinity, no less than his personal avocation, amply suited Father Pelton for his Latin American activities. He spent the fall of 1965 in Rome as a peritus or theological advisor to Cardinal Leo Suenens during the last session of the landmark Second Vatican Council. The voice of Cardinal Suenens, who enthusiastically espoused increased lay leadership in church affairs, was one of the most influential at the Council. It made a profound impression on Father Pelton’s world view as well, and the phrase grass roots still comes to his lips as easily as if he were an agronomist.

“The Council, or rather, the Holy Spirit at the Council, deeply affected my outlook on the Church and the relationship between the hierarchy and Catholic lay people,” Father Pelton said. “It began to seem much more important to understand and experience what was going on at the grassroots of the church, and I felt myself more and more drawn in that direction.”

That direction was southerly. During the 1970s and 80s, even as he directed the Institute for Clergy Education and the Institute for Pastoral and Social Ministry at Notre Dame, Father Pelton was a frequent visitor to University alumni and Church activists and missionaries in Central America, where a toxic mixture of U.S. strategic interests, excruciating poverty, oppressive governments and revolutionary movements had exploded into open warfare. It was during this period that he became friends not only with some of the most influential actors in the region, but also with the most predictable and numerous victims of war, the poor, the people at his beloved grass roots.

These relationships have had a marked influence on Father Pelton’s life since what, for a less energetic man, would be retirement. In addition to having published five books, all of them having to do with the church of the grass roots, since 1994, he continues to teach in the theology department, serve as a fellow in the Kellogg Institute for International Studies, and to direct Latin American North American Church Concerns (LANACC). Among its other activities, LANACC sponsors Notre Dame’s Archbishop Oscar Romero Lectures, which annually bring human rights advocates, civic leaders, and Latin American scholars to campus to speak on the martyred Salvadoran archbishop’s memory and its implications for the church in Latin America and throughout the world.

During this year’s spring break, Father Pelton led a group of Notre Dame students and faculty to Cuba to examine the life and situation of the Catholic Church there. The students are enrolled in his theology course, “From Power to Communion.” This was the third such tour Father Pelton has recently led to Cuba, where he and his companions visited a wide variety of sites as guests of the country’s Catholic bishops, who administer several projects there. Asked whether he will celebrate his 85th birthday next year with a fourth Cuban excursion, he answered typically: “Why not? You want to come?”