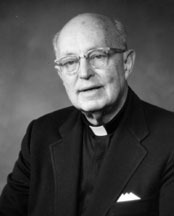 A native of Washington, D.C., Father Harvey was educated at St. Paul grade and high school and worked briefly for the Washington Railway and Electric Company before coming to Notre Dame in 1942 to study for the priesthood in the Congregation of Holy Cross.

Graduated from Notre Dame in 1947, Father Harvey returned to Washington to study theology at Holy Cross College and was ordained on June 5, 1951, at the Shrine of the Immaculate Conception. He studied drama at Catholic University, earning a graduate degree in 1953, and returned to Notre Dame to embark on a long and celebrated career teaching drama and directing plays on campus. His many productions included,HamletandLong Days Journey IntoNight,My Fair LadyandSouth Pacific.He retired in 1969, and began to serve for many years as an assistant to Rev. Edmund P. Joyce, C.S.C., then Notre Dames executive vice president, but twice returned to Washington Hall to direct highly acclaimed productions ofDeath of a SalesmanandThe Crucible.

Perhaps more than any other person, Father Arthur Harvey is considered the father of theater at Notre Dame,said Mark C. Pilkinton, professor of film, television and theater.Trained as an accountant but blessed with an abiding interest in the theater, Father Art worked tirelessly to achieve both artistic merit and academic integrity.With such student actors in his early years as Phil Donohue, Reg Bain and Gene Gorski, and supported by a faculty that included Fred Syburg, he oversaw a remarkable period ofserious and good theatre at Notre Dame.

During his tenure, Father Art famously recreated on the Washington Hall stage the grandest of Broadway dramas and musicals of the day.He modernized and updated Washington Hall in 1956, turning the heavily decorated 19th-century interior into a modern fully functional theater.Imperious, disciplined, and hard working, he was also a master stage director known for his careful attention to detail and his work ethic that consistently produced work of the highest merit.No one loved Notre Dame more, and no one loved theater more.All of us who worked with Fr. Art will be forever grateful.

The Notre Dame Alumni Association named an award in honor of Father Harvey in 2000 to be given annually to a graduate for outstanding contributions to the performing arts. The first recipient of the award was Father Harvey.

A viewing and wake service will be held at 2:30 p.m. Sunday (Feb. 10) in the chapel of Moreau Seminary.A funeral Mass will be celebrated Monday (Feb. 11) at 3:30 p.m. in Notre Dames Basilica of the Sacred Heart.