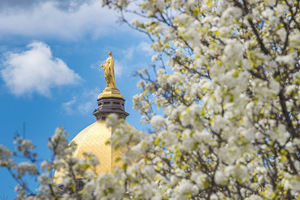 The awards are presented by the Office of the Provost, and the recipients are selected through a process that includes peer and student nominations.

The Joyce Awards, established in 2007, are supported by a gift from the late Father Joyce’s classmates of Notre Dame’s Class of 1937. They honor faculty members who have had a profound influence on undergraduate students through sustained exemplary teaching, and, in particular, recognize professors who create environments that stimulate significant student learning, elevate students to a new level of intellectual engagement and foster students’ ability to express themselves effectively within their disciplines.

The Dockweiler Awards, also established in 2007 with a gift from the Julia Stearns Dockweiler Charitable Foundation, recognize faculty or staff members who have demonstrated a sustained commitment to Notre Dame undergraduates through outstanding mentoring, academic advising or career counseling services.
The Dockweiler Award winners for the 2016-2017 academic year are: