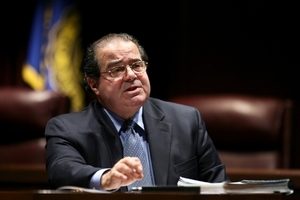 U.S. Supreme Court Justice Antonin Scalia, who was nominated to the Supreme Court in 1986 by President Ronald Reagan and was known for his conservative views, died Saturday (Feb. 13) at the age of 79. He will be missed, said University of Notre Dame Law School professors.

“It would be difficult to overstate Justice Scalia’s impact on the law. His jurisprudence touched nearly every area of the Constitution, and he has profoundly influenced the way that lawyers think about questions of statutory and constitutional interpretation," said Amy Coney Barrett, Diane and M.O. Miller, II Research Chair in Law, who served as a law clerk to Scalia from 1998-99. "However, those of us who knew the Justice mourn the loss of a mentor and friend. His brilliance and wit not only lit up a pen, they lit up a room. He was larger than life, and it is difficult to imagine life without him in it.

“My sadness is tempered only by my gratefulness for having known this truly great man. Both Justice Scalia and the family he so loved are in my prayers.”

“Justice Scalia was an exceptional jurist who, by force of reason and principle, transformed debates over constitutional law and the role of courts in our federal system. He was one of the most influential justices of our day, and he likely will go down as one of the most influential justices in United States history," said Anthony J. Bellia Jr., O’Toole Professor of Constitutional Law, who served as a law clerk to Scalia in 1997-98.

“Justice Scalia was beloved by those who knew him — for his warmth, his friendship and his example. To work with him was a privilege. His sharp intellect, quick wit and commitment to principle were unfailing. More importantly, his witness to the things in life that matter most — including faith and family — was constant. My thoughts and prayers are with his wife, Maureen, and his entire family,” Bellia said.

William Kelley, associate professor of law, who served as a law clerk to Scalia in 1988-89, said, “We lost a great and consequential jurist, whose contributions to the law have been immense. During his almost 30 years on the Supreme Court, Justice Scalia set the terms of debate among lawyers, judges and academics. His piercing intellect, his unyielding devotion to principle and his graceful pen produced a body of work that will influence American law for generations to come. History will record him as one of America’s greatest justices.

“But for those who knew and loved him, today is about the loss of a great man — a boss, a mentor, a role model and a friend. Anybody who spent any real time with the Justice came to love him. His wit, his quick mind, his love of laughter and a great story — those are the things that his friends will remember.

“Personally, I will always remember and be grateful for the many conversations we had, and the things he taught me about faith, and the things that really matter. I pray for the repose of Justice Scalia’s soul, and for the comfort of his wife and family.”