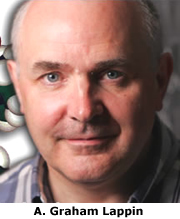 University of Notre Dame organic chemist A. Graham Lappin, a prodigious researcher and the longest-serving chair of chemistry and biochemistry in memory, has been selected by his peers as the recipient of the 2007 Faculty Award. Lappin was honored Tuesday (May 22) during the annual Presidents Dinner.

His record of research and scholarship since joining the University in 1982 is matched by his passion for teaching and dedicated service to his department and to Notre Dame,the award citation reads.

Lappins primary research area is mechanistic inorganic chemistry with special attention to the design of novel chiral ligands and investigations into new magnetic materials. His work is supported by foundations and federal agencies alike. He is in his fourth term as chair of the department. A 2004 Kaneb Teaching Award winner, he remains dedicated to developing excellent teachers, leading workshops on such topics as the importance of diversity inside the classroom and out.

Burkehas taken the Executive MBA program from a regional Midwestern offering to one that is international in scope and ranked among the top 20 programs globally,his citation reads. The associate dean of the Mendoza College of Business also designed the Executive Integral Leadership Program, which cultivates personal leadership development.He exemplifies grace in action and embodies the spirit of NotreDame,the citation adds.

Crafton, a professor of film, television, and theatre and chair of the music department, is a distinguished scholar of film history and animation whose recognitions include honors from theAcademyofMotion Picture Artsand Sciences.A passionate, innovative instructor,his citation reads,he has led significant curricular and administrative developments, mentored a number of promising students to pursue graduate study, and developed and taught new research courses for seniors, for which he received sterling student reviews.

Turpin most recently facilitated theGraduateSchools first Commencement exercises. The associate dean for academic programs and policies is lauded for her work coordinating the National Research Council survey,achieving one of the highest response rates in the country,her citation reads. The 17-year veteran facilitated the graduate and professional student life survey, coordinated revisions to the Graduate School Bulletin and coordinated the committee to develop guidelines for reviews of departments, centers and institutes.

A faculty member acknowledged at the Presidents Dinner also was honored at Saturdays Graduate School Commencement. Julia F. Knight received the 2007 Rev. James A. Burns, C.S.C., Graduate School Award for teaching excellence and exemplary graduate education support. She has directed graduate studies for mathematics since 2003 and has been described asthe guardian angel of young logicians.

Other recipients of annual excellence awards are: