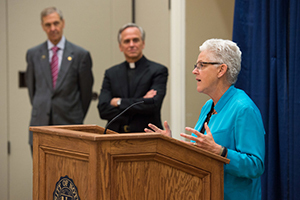 Gina McCarthy speaks at a news conference at the Morris Inn

Gina McCarthy, administrator of the U.S. Environmental Protection Agency (EPA), describes action against climate change as a moral obligation and praised the University of Notre Dame’s recent commitment to eliminate use of coal by 2020 as an example of an institution “putting its investments where its values are.”

Joining the University’s president, Rev. John I. Jenkins, C.S.C., and its executive vice president, John Affleck-Graves, at a noontime news conference in the Morris Inn Friday (Sept. 25), McCarthy, the EPA’s senior official, said that the recent exhortations of Pope Francis in his encyclical Laudato Si’ and during his U.S. visit “reaffirm that the tide has really turned; that we’re past the old days of debate and incremental progress. Solutions are here. Action is happening now.”

According to McCarthy, Notre Dame’s energy policy is “a tremendous example of that. Here, faith and values are completely aligned with the imperative to take action. I commend the University for setting the ambitious goal of ceasing to burn coal entirely within five years and cutting its carbon footprint by more than half by 2030. That is what leadership and stewardship look like.”

Earlier Friday, McCarthy met with Notre Dame students and faculty for a wide-ranging discussion of sustainability and environmental topics. Fresh from and clearly exhilarated by Pope Francis’ visit to Washington, she alluded often to the pope’s recent encyclical and suggested that the EPA’s recently announced Clean Power Plan was an appropriate response to Francis’ call for action on climate change. McCarthy said the national plan, while flexible enough to be adapted to the diverse needs of individual states, “puts us on track to slash carbon pollution from U.S. power plants 32 percent below 2005 levels by 2030,” and thus helping the nation “to avoid thousands of premature deaths and hospital admissions and tens of thousands of asthma attacks in 2030.”

Both at the news conference and during her discussions with Notre Dame students, McCarthy, an alumna of the University of Massachusetts, repeatedly and cheerfully acknowledged that Saturday’s football game will pit the green associated with her hosts and the environment against her own alma mater, and she relished the double entendre of the cheer, “Go Green! Go Irish!”