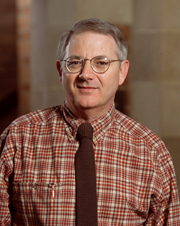 Eric J. Jumper, professor of aerospace and mechanical engineering at the University of Notre Dame, has been appointed to a new National Research Council (of the National Academies) study committee. His term on the Materials Needs and R&D Strategy for Future Military Aerospace Propulsion Systems committee begins in January.

National security demands that the United States continue to improve its surveillance and interception capabilities, which requires aerospace propulsion to move toward the development of high Mach manned and unmanned vehicles. In light of this, the goals of the committee are to address the challenge of developing new materials for these vehicles and to determine appropriate directions that will allow the United States to maintain a leading edge in propulsion technology.

Among the propulsion systems to be reviewed by the committee are air breathing and self-contained fuel/oxidizer systems. (Air breathing systems take the oxygen needed for engine combustion from the atmosphere through which the vehicle is traveling instead of from an onboard tank).

In addition, the committee will investigate opportunities to advance corrosion research, including materials degradation and mitigation. It will address fuel efficiency challenges at subsonic and supersonic levels and is charged with identifying the impact of current non-U.S. investments and reviewing timetables for the evolution of new materials.

Jumper previously served on an NRC committee for hypersonics and access to space. His research encompasses aero-optics, aircraft turbine (jet) engines and aircraft wake dynamics. His work at Notre Dame has led to a number of breakthrough advances in knowledge and technology. Using a new wavefront sensing instrument developed at Notre Dame, he made the first time-resolved wavefront measurements for laser propagation through a Mach 0.8 free shear layer. His expertise in military acquisition and procurement, government technical program management, aerospace engineering and space science, physics, thermodynamics, propulsion and combustion, orbital mechanics, aerodynamics, reentry heating and thermal protection materials, surface chemistry, and aero-optics adds to the scope of the committee.

A member of the Notre Dame faculty since 1989, Jumper previously served as chief of the Laser Devices Division at the Air Force Weapons Laboratory and professor at the Air Force Institute of Technology. He is a fellow of the American Institute of Aeronautics and Astronautics and a member of the American Society for Engineering Education, and was named outstanding alumnus of the Department of Mechanical Engineering at the University of New Mexico in 1997. He earned a bachelor’s degree in mechanical engineering from New Mexico, a master’s degree in mechanical engineering from the University of Wyoming and a doctorate in fluid dynamics and laser physics from the Air Force Institute of Technology.