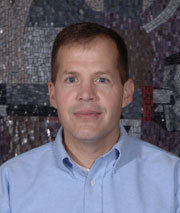 Jeffrey W. Talley, associate professor of civil engineering and geological sciences at the University of Notre Dame, has been promoted from the rank of colonel to brigadier general in the U.S. Army Reserves. The promotion ceremony took place last month at Maxwell Air Force Base in Montgomery, Ala.

Talley, who joined the Notre Dame faculty in 2001, served most

recently as a strategic planner for the War on Terrorism Directorate of the Joint Chiefs of Staff (JCS). He remains one of just a handful of reserve officers who have been appointed to the JCS.

Previously, he spent six months serving in Iraq as chief of operations in charge of 4,000 engineers and soldiers for the U.S. Armys 416th Engineering Command. He received the Bronze Star for his service during Operation Iraqi Freedom.

A full-time member of the Universitys engineering faculty, Talley specializes in the environmental processes and treatment of contaminated surface water, groundwater, soil and sediment. His interests encompass the integration of engineering, microbial ecology and toxicology for purposes of enhancing detection, characterization and remedial strategies. He also works with fiber optic biosensors and networked sensors.