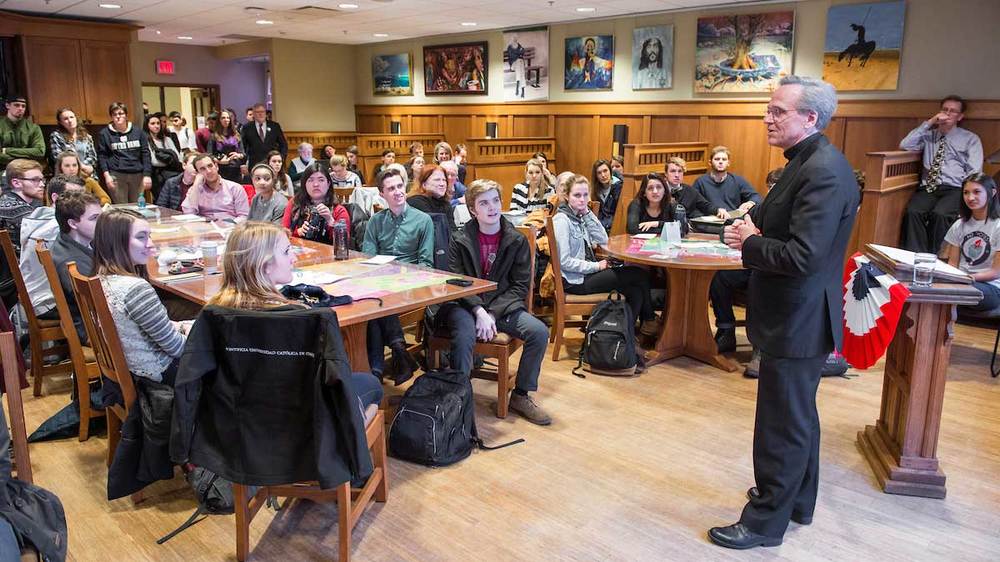 Established to register, educate and mobilize University of Notre Dame students ahead of pivotal elections, NDVotes has evolved to become a nonpartisan leader in politics, working to foster conscientious engagement in political and civic life on campus.

As evidence of that work, the student-led organization recently was recognized by TurboVote, an online service of Democracy Works that facilitates voter registration, requests for absentee ballots and voting reminders, for its engagement efforts over the past year.

According to the nonpartisan voter assistance group, NDVotes engaged more than 500 students with TurboVote during the 2017 calendar year, placing it within the top 10 among 104 college and university partners.

“TurboVote is only as effective as those committed to growing its audience: Those who believe in democratic participation and the power of one’s voice at the polls,” Democracy Works wrote in praise of NDVotes. “The University of Notre Dame’s voter engagement efforts in 2017 are an incredible reflection of these ideals.”

As a successor to Rock the Vote, the MTV-led voter registration, education and mobilization campaign, NDVotes has been active on campus since 2008, participating in that year’s presidential election as well as the midterm elections in 2010.

The group went dormant for a period but then reemerged in 2015.

Wanting to increase political engagement on campus, Sarah Tomas Morgan, then a freshman, helped resurrect the group with help from other students.

“The 2016 election was upcoming, but it wasn’t on a lot of people’s minds,” said Tomas Morgan, a liberal studies major and peace studies minor from South Bend. “So I was looking for people who wanted to engage in political conversation.”

She added, “I knew from growing up in South Bend that Notre Dame had had various programs like Rock the Vote and NDVotes in the past, and I wanted to make sure that something like that happened again.”

With support from the Center for Social Concerns, the Rooney Center for the Study of American Democracy and the constitutional studies minor, the newly reestablished organization — governed by a nonpartisan student task force — helped register, educate and mobilize hundreds of Notre Dame students ahead of the polarizing 2016 presidential election.

That was supposed to be it, but with an intense mixture of excitement and anxiety on campus after the election of Donald Trump, the group decided to continue in its mission as a permanent part of the political landscape on campus.

“NDVotes in the past had been focused on registration and education around elections,” Tomas Morgan said. “But what we found was that task force members and (students in general) were looking at ways to talk about the election. They wanted to know what had happened and what was going to happen as a consequence of the election. So we decided to continue holding bipartisan education events and voter registration.”

“There was such energy and engagement that, after the November election, the student task force didn’t want to let go of it,” said Rosie McDowell, who directs justice education at the Center for Social Concerns.

Recent themes have included “Godless Politics: The Political Causes and Consequences of America’s Secular Turn” and “Truth, Trust and Trump: The President’s War on the Press.”

“We try to have a broad range of event topics because we find that different topics draw from different parts of the political spectrum,” Tomas Morgan said.

The tone is civil.

“Students have strong political opinions, but they don’t always feel safe or okay to talk about them in the residence halls,” McDowell said. “So what we try to do is create space for them to voice those opinions, at least for an hour and a half.”

The group also hosts an annual dorm competition on National Voter Registration Day, the fourth Tuesday of September, and engages with incoming freshman as well as transfer and graduate students as part of “Welcome Weekend” each fall.

Currently, the group is gearing up for consequential midterm elections this fall, with control of the U.S. House and Senate, as well as several statehouses and governorships, at stake — not to mention local boards, councils and mayorships.

“The midterm is a big deal, so the (Pizza, Pop & Politics) events will focus on (topics like) gerrymandering and voter suppression and the psychology of voting and political ads,” McDowell said, citing a few possible examples.

But as it matures, the group is considering a move beyond campus as well, Tomas Morgan said, into the community.

“I and a few other people on the task force hope to establish a community engagement sector of the task force to integrate NDVotes into the South Bend community as a way to be more sustainable as an organization but also more socially, politically and civically conscious,” she said.

Already, Tomas Morgan said, the group has started reaching out to potential partners, including the Northern Indiana Restorative Justice and Reentry Clinic, a nonprofit record expungement agency that counts Notre Dame as a partner, and local high schools.

“They’re looking at how they can provide voter registration assistance in the community,” McDowell said of the task force, “perhaps at the high school level or among the formerly incarcerated at the Second Chance Clinic,” another name for the reentry clinic.

Consistent with its nonpartisan approach to politics, the student task force is composed of members of various social and political groups on campus, including the Notre Dame College Republicans and Democrats.

Dylan Jaskowski, a junior accountancy and political science double major and president of the College Republicans, described the relationship as “beneficial in that it gives us an avenue to reach out for collaboration on events with other political clubs.”

Moreover, Jaskowski said, it contributes to a more informed and engaged student body.

“In the past, there has been a general apathy regarding politics on college campuses,” he said. “So by educating students about the political atmosphere on campus and in our country, there will hopefully be more students interested in politics, and this increased engagement should lead to more people contributing to civil discourse, which should create better policy.”

For McDowell, it all comes back to the students.

“To me, the real story is that this is a student-driven initiative,” she said. “These students really wanted to bring active political participation back to our campus.”

“The student leadership of NDVotes has been outstanding in helping us identify high-quality speakers who represent the full spectrum of political viewpoints, in organizing our “Pizza, Pop & Politics” events and in rallying their fellow students in their dorms and other campus organizations to register to vote and to become more engaged in community and national political issues,” said Geoffrey Layman, professor of political science and interim director of the Rooney Center.

An important part of that leadership, Tomas Morgan, now a senior, agreed, adding that she is “not in the least bit worried” about the future of the program — even as she prepares to graduate and move on to other challenges in May.

“We have an outstanding team of people from across the political spectrum who care deeply about political engagement on this campus,” she said, “and who know just as well as I do what students are looking for in terms of political education.”