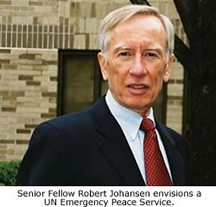 Robert Johansen is known for coming up with ideas that are ahead of their time: proposals having to do with world order, international ethics, global governance, and the maintenance of peace and security. Thirty years ago, for example, he described the need for a United Nations rapid reaction force that could stop genocide and other crimes against humanity- an idea now getting traction on the worlds political landscape.

Johansen, a Notre Dame political scientist and Kroc Institute senior fellow, is chief writer for a coalition of academic experts, former officials and representatives of human rights organizations who are working to establish a United Nations Emergency Peace Service. This service, dubbed UNEPS, would be a permanent agency able to set off for an emergency zone within 24 hours after UN authorization. Because members of the service would be individually recruited among volunteers from many countries, Johansen notes, it would not face the usual reluctance of UN members to deploy their own national units. Because it would be an integrated service, including conflict-transformation specialists, civilian police and judicial and military personnel, it would not suffer from lack of essential components or from confusion about the chain of command.

Such a law enforcement service could have stopped genocide in Rwanda in 1994, and is undeniably needed in places such as Sudans Darfur region, Johansen contends.

Everyone knows that at times innocent people are ruthlessly killed simply because of their national, ethnic, racial or religious identities," he said. "We also know that such killings and other crimes against humanity are prohibited by existing international law. The international community could prevent many of these crimes if it would act quickly and send a professional security force to enforce the law.

If a peace service had been established years ago, he argues, it could have curtailed some of the atrocities that have killed hundreds of thousands of civilians, forced millions from their homes, destroyed entire economies, and wasted hundreds of billions of dollars.

In recent years, concerned governments, several United Nations study groups, the UN secretary-general, and many independent experts have all stressed the need for more effective rapid-reaction capability. Yet, governments are not taking the lead.

To fill the leadership void, Johansen helped to create the independent Working Group for a United Nations Emergency Peace Service. As its rapporteur, Johansen authoredA United Nations Emergency Peace Service to Prevent Genocide and Crimes against Humanity,a statement that grew from the coalition’s first meeting, in 2003, in Santa Barbara, California.

Following a second meeting of experts in Cuenca, Spain, in 2005, plus many international conference calls, Johansen wrote another report that details the principles on which participants agreed. TitledDiscussion of the Proposal for a United Nations Emergency Peace Service: The Cuenca Report,it also identifies questions for further research, including: How can the legitimate interests of both the Global South and the North be advanced by UNEPS? How might UNEPS be authorized for deployment if the Security Council is deadlocked during a crisis? How might UNEPS and the International Criminal Court work together to implement human rights law? Should UNEPS address terrorist violence?

The Ford Foundation, which helped pay for the Cuenca conference, made a second grant in November 2005 in support of future study, with Johansen as research director. The Working Group will meet again this month in Vancouver, with financial help from the Ford Foundation and Simons Foundation, to discuss membersresearch and strategy for building worldwide support for the initiative.

Organizations that have shaped the UNEPS proposal and support it in principle include Human Rights Watch and the Union of Concerned Scientists. Juan Mendez, the UN secretary-generals special representative for genocide (and a former Notre Dame faculty member), has endorsed the idea. So have individual legislators in national parliaments and congresses around the world.

The working group includes former Canadian Foreign Minister Lloyd Axworthy; Sir Bryan Urquhart, the former UN under-secretary-general for special political affairs, who has worked on UN peace operations with five different UN secretaries-general; Lt. General Satish Nambiar of the Indian Armed Forces, who commanded UN peacekeeping operations in Bosnia; Professor Hussein Solomon, director of the Centre for International Political Studies at the University of Pretoria, South Africa; and Professor Alcides Costa Vaz from the University of Brasilia, a security expert and consultant to the Brazilian government. Some members, particularly William Pace, the convener of the Coalition for an International Criminal Court, are drawing on experiences gained in the worldwide effort that succeeded in establishing the court.

In the mid-1990s, when the discussions for the court began in earnest, no one would have predicted that the treaty for an international court could have been completed by 1998 and that it would be a reality by 2002, Johansen points out. With appropriate research, discussion, and coalition building, he believes that the United Nations Emergency Peace Service can be established in the foreseeable future.