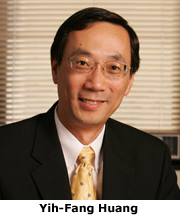 Yih-Fang Huang, professor of engineering and concurrent professor of computer science and engineering at the University of Notre Dame, has been awarded a Fulbright-Nokia Scholarship to support his appointment as a visiting professor at the Helsinki University of Technology (HUT) for the fall 2007 semester. During his visit toFinland, Huang will carry out a program of research and deliver lectures related to wireless communication.

Huangs award will provide support for a project titledMIMO-OFDM for Emerging Wireless Communication Technology.It involves a form of wireless communications called orthogonal frequency division multiplexing (OFDM), in which a single data stream is transmitted on several different radio frequencies in such a way that they do not interfere with one another. Huangs focus will be on signal processing techniques applicable to OFDM systems with multiple antennas at the transmitter and/or receivermultiple-input-multiple-output (MIMO) systems.

Helsinkiis an international center of activity in wireless communications due to the technology giant Nokias presence there. Nokia is sponsoring Huangs award. __

During his time at HUT, Huang will collaborate with Visa Koivunen of the Signal Processing Laboratory at HUTs SMARAD Center of Excellence in Research.

Huang, who joined the Notre Dame faculty in 1982, served as chair of the Department of Electrical Engineering from 1998 to 2006. He received his undergraduate education atNationalTaiwanUniversity, earned his masters degree from Notre Dame, and completed his doctorate atPrincetonUniversity.

Huangs research addresses issues in statistical communication theory (the statistical theory of signal detection and estimation, especially as they apply to wireless communication). During his 25 years at the University, he has received research funding from agencies such as the National Science Foundation, the Office of Naval Research and the U.S. Army.

The Fulbright Scholar Program is administered by the J. William Fulbright Scholarship Board, a presidentially appointed board responsible for establishing worldwide policies for the program and for the selection of Fulbright recipients. Fulbright scholarships are made possible through funds appropriated annually by the U.S. Congress and, in many cases, by contributions from partner countries and/or by private sector firms, such as Nokia. Each year, the program sends about 800 faculty and professionals to 140 countries to lecture, do research and participate in seminars.