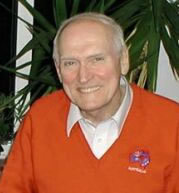 James L. Merz, the University of Notre Dame’s Frank M. Freimann Professor of Electrical Engineering, has been named a fellow of the Materials Research Society (MRS). He was cited for his “outstanding achievements in electronic materials, particularly compound semiconductors… and for intellectual leadership in advancing materials research in the U.S. and internationally.”

The Materials Research Society is a nonprofit association of more than 14,000 scientists, researchers and engineers engaged in interdisciplinary research on materials of technological importance. A lifetime appointment, election as a fellow in the MRS is limited to less than .2 percent of the membership of the society each year (approximately 30 researchers).

Merz, an internationally recognized scholar in the field of optoelectronic materials and devices, previously served the University as interim dean of the College of Engineering and vice president for graduate studies and research. A Notre Dame alumnus, he returned to the University in 1994 to direct a team of researchers investigating Quantum Cellular Automata, a transistorless approach to computing sometimes called Notre Dame logic.

Prior to his return, Merz served as professor of electrical engineering, professor of materials and director of the Center for Quantized Electronic Structures (QUEST) at the University of California at Santa Barbara. In addition to directing QUEST, a National Science Foundation (NSF) science and technology center, he also chaired the national council of directors of the NSF science and technology centers. He has published more than 400 papers and holds five patents.

Merz is a fellow of the American Association for the Advancement of Science, the American Physical Society and the Institute of Electrical and Electronic Engineers; and he is a member of the Society for Values in Higher Education. He also is the recipient of an Alexander von Humboldt Research Award in recognition of lifetime achievements in science and engineering and an honorary doctorate from Linköping University if Sweden.

Merz was graduated from Notre Dame with a bachelor’s degree in physics in 1959 and attended the University of Göttingen in Germany as a Fulbright Fellow immediately thereafter. He attended Harvard University as both a Woodrow Wilson and Danforth Fellow, earning his master’s degree in 1961 and doctorate in 1967.