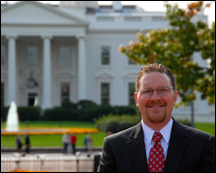 J. Nicholas Laneman, assistant professor of electrical engineering at the University of Notre Dame, has been named one of the 58 recipients of a Presidential Early Career Award for Scientists and Engineers (PECASE) and one of the 20 honorees nominated by the NSF from among the grantees of its Faculty Early Career Development (CAREER) program. He and the other PECASE recipients were recognized in a ceremony Nov. 1 at the White House.

The PECASE program, which was established in 1996, identifies and honors outstanding young researchers and is the highest honor that a beginning scientist or engineer can receive from the U.S. government. Selection is based on innovative research and community service as demonstrated through scientific leadership, education or outreach. Nine government agencies, including the National Science Foundation (NSF), nominate candidates for the PECASE program.

Because the PECASE honors young scholars for their outstanding research and teaching accomplishments and recognizes the potential impact they may have on future generations, it is an extraordinary award for a young faculty member,said James L. Merz, interim dean of the College of Engineering and the Frank M. Freimann Professor of Electrical Engineering.We are delighted that Professor Laneman has been honored in this fashion.

Lanemans award-winning CAREER (and subsequently PECASE) project,Toward a Renaissance in Finite Blocklength Information Theory,focuses on fundamental performance trade-offs of communication systems and networks for applications, such as wireless, in which transmission intervals are limited relative to the randomness of the communications medium. Longer intervals enable more reliable transmissions, but they also contribute to delays. Users who accept long delays for some applications, such as text messaging or e-mail, find them unacceptable for other applications, such as cell phone calls or video streaming. The goal of the project is to provide a mathematical and computational framework for characterizing such trade-offs and designing more efficient systems.

In addition to theoretical work, Laneman and his research group are developing a wireless network testbed, based upon software-defined radio (SDR), to encourage the implementation and verification of communications algorithms and to enhance SDR technology. The team, which includes undergraduates as well as graduate students, is working to make SDR more portable, affordable and reliable for a variety of applications.

As part of this effort, Lanemans team has obtained funding from the National Institute of Justice to develop SDR technology in order to help public safety and emergency response personnel better communicate, especially during catastrophic events, when traditional infrastructure is unavailable or inoperable.