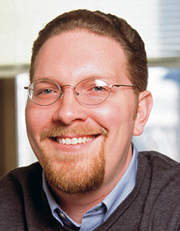 J. Nicholas Laneman, assistant professor of electrical engineering at the University of Notre Dame, has been named a recipient of a 2006 National Science Foundation (NSF) Early Career Development (CAREER) Award.

Established in 1995, the CAREER program recognizes and supports junior faculty who exhibit a commitment to providing stimulating research and outstanding educational opportunities. It is the highest honor given by theU.S.government to young faculty members in engineering and science.

Lanemans project,Toward a Renaissance in Finite Blocklength Information Theory,addresses optimum blocklengths in communication systems. Blocklength refers to the amount of time allowed for encoding a certain amount of information. Longer blocklengths provide more reliable transmissions, but they also contribute to delays. Users who accept delays for some applications, such as text messaging or e-mail, find them unacceptable for other applications such as cell phone calls or video streaming.

As with other successful CAREER projects, Lanemans proposal includes an educational outreach component. He and students in the Department of Electrical Engineering are attempting to identify the optimum blocklengths for specific applications in communications systems that would balance the need for reliable communication with tolerable delays. Students will employ theoretical analysis, computer simulations, and test bed experiments throughout the project.

In addition to directing the CAREER project, Laneman also is the principal investigator for the collaborative research project titledDelay Constrained Multihop Transmission in Wireless Networks: Interactions of Coding, Channel Access and Routing,which is funded by the Theoretical Foundations program of the Computer and Information Science and Engineering division of the NSF. According to NSF, the grant supporting this project was the largest among the 31 awards made by the program in 2005.

Laneman, who joined the Notre Dame faculty in 2002, specializes in the areas of communications and signal processing, with a particular emphasis on wireless communications and networking. He received his bachelors degree in electrical engineering and computer science fromWashingtonUniversityinSt. Louisand his masters and doctoral degrees in electrical engineering from the Massachusetts Institute of Technology.