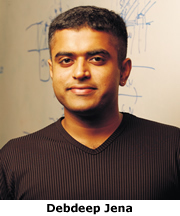 Debdeep Jena, assistant professor of electrical engineering at the University of Notre Dame, has been named the recipient of a 2007 National Science Foundation (NSF) Early Career (CAREER) Award.

The CAREER program, which was established by NSF in 1995, recognizes and supports junior faculty who exhibit a commitment to conducting research and providing educational opportunities for students. It is the highest honor given by theU.S.government to young faculty in engineering and science. Awards are distributed based on a detailed description of the applicants planned research and educational activities for a five-year period. The competition is highly competitive, with a success rate between 15 and 20 percent.Jenawill receive a total of $580,000 over the next five years to implement his plans.

A Notre Dame faculty member since 2003, Jenas research focuses on two topics: the growth and properties ofIII-V semiconductors,which are complex electronic materials capable of operating faster than silicon, the traditional workhorse for the semiconductor industry, and their application to solid-state devices such as high-speed electronic devices and photovoltaics (solar cells); and the investigation and development of nanoscale devices based on quantum wires.

Jenas work on quantum wires is part of a collaboration with Masaru Kuno, assistant professor of chemistry and biochemistry. In its initial stages, the interdisciplinary team is seeking to better understand the charge transport properties of single and networked nanowires so that they may apply the knowledge to the development of devices such as wearable transistors, photo detectors, sensors and photovoltaics.

In addition to the CAREER award,Jenas research has attracted funding from the Office of Naval Research, the Air Force Office of Scientific Research and the Army Research Office.

Jenaearned his bachelors degree in electrical engineering, with a minor in physics, from the Indian Institute of Technology inKanpurin 1998 and his doctorate in electrical and computer engineering from theUniversityofCaliforniaatSanta Barbarain 2003.