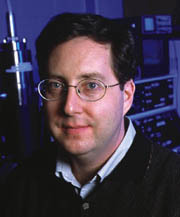 Gary H. Bernstein, professor and associate chair of the Department of Electrical Engineering at the University of Notre Dame, has been named a fellow of the Institute for Electrical and Electronics Engineers (IEEE). The world’s largest technical professional society, the IEEE is composed of more than 365,000 members who focus on advancing the theory and practice of electrical, electronics and computer engineering.

A faculty member since 1988, Bernstein’s interests are in ULSI (Ultra Large Scale Integration) fabrication and related areas, including the experimental study of quantum-effect devices based on semiconductor and metal systems; digital integrated circuits based on resonant tunneling devices, which have been demonstrated to operate at speeds greater than 10 Ghz; and the reliability of deep submicron metal interconnects for future ULSI applications.

A member of IEEE, the American Society for Engineering Education and the American Vacuum Society, Bernstein serves as chair of the technical committee on nanofabrication for the IEEE Nanotechnology Council. He was named a National Science Foundation White House Presidential Faculty Fellow in 1992 and named among the top 100 nanotechnology researchers by D&A Hi-Tech Information. He was listed in Who’s Who in Engineering Education in 2002.