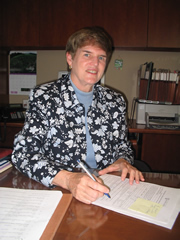 Try to imagine Notre Dame students without e-mail, cell phones and laptop computers. That’s how Eileen Kolman found them when she took over as dean of Notre Dame’s First Year of Studies (FYS) Program a decade and a half ago. Times have changed, and when Kolman retires this month, she’ll leave behind a very different student body than the one she first encountered back in 1990.

“I think students come to us better-prepared now. They also come to us much more stressed,” she says. “The escalation of the U.S. News&World Report rankings, which were rather young when I began in this position, helped to create this notion that we are such a competitive place. That has led to the preparation students go through now -taking all the AP (advanced placement) credit courses they can get their hands on, takingSATpreparation classes until they get the scores as high as they possibly can -the whole notion of working toward this ‘perfect profile’ starts in kindergarten for some.”

Kolman was appointed dean only one year after she came to Notre Dame as associate provost. She had served as secretary for the search committee for the dean’s position and during the selection process, the committee came to realize its strongest candidate was actually one of its own. She recalls how one afternoon, following a round of interviews with the top candidates, she commented to then-Provost Timothy O’Meara, “No white smoke today,” referring to theVatican’s tradition of announcing the selection of a new Pope.

Shortly after, O’Meara asked Kolman if she would consider interviewing for the job, and she agreed to throw her hat into the ring.

“He called the search committee together for1 o’clockthat day,” she recalls. “So I went in and interviewed. I went back to my office and about 45 minutes later, he came in, went over and got a big wad of Kleenex out of the box, and lit it with a lighter. He asked, ‘Do you know what this is?’”

It was, of course, white smoke.

As dean, Kolman headed up a number of initiatives, many of which she can now reflect upon with pride – the implementation of University Seminars (required courses for first-year students taught by full-time faculty from various disciplines), improvement of the first-year composition program, and an overall decrease in class sizes. When she was first appointed, it was not uncommon to have 150 students enrolled in a lecture course, and she even recalls one math class with an enrollment of 450. Today, the average is more like 75, with more tutorials available in bigger classes. It’s all part, she says, of the programs commitment to promoting faculty interaction with students at the very beginning of their college careers.

It used to be that there was a small cadre of faculty who taught all the lecture-type courses,she remembers.And with the introduction of things like the seminars and breaking down some of the larger classes, now we see a lot more faculty involvement with first-year students, and I think we need ways to cultivate that.

Since its creation in 1962, the FYS has provided Notre Dame students with the foundation for a liberal education. Regardless of their intended program of study, all first-year students must enroll in the FYS, which enables them to study broadly in the arts and sciences and to consider various possibilities before deciding upon a college major. In addition to advising students on course selection, FYS staff members use a variety of support services to ease the transition from high school to university life.

FYS is largely responsible for Notre Dame’s 98 percent student retention rate from the freshman to sophomore years, and it contributes to the University’s 95 percent graduation rate, a standard that ranks among the top five in the nation.

In the past 15 years, Kolman has seen a lot of student trends come and go – some good, such as a more diverse student body, and some not so good, including the prevalence of eating disorders, an increased pressure to succeed, and yes, even those technological advances, which she considers a mixed blessing. While e-mail and cell phones have made student life more convenient, she also says there can most definitely be too much of a good thing when it comes to staying connected.

I do think students are much more in touch with their parents, which we certainly encourage,she says.But Ive heard a statistic that, on average, a student makes as many as three phone calls home a day, and that seems like a bit much to me. Im not sure its good for them, or their parents, to know detail-by-detail how they are living their lives. Since some of the biggest challenges of college are growth and independence, maybe the cell phone doesnt really help that.

Her advice to parents of new college students?Give them some room. Certainly keep in touch. For Notre Dame students, their families are a very important part of their lives, but they do need a little distance and they do need to make their own decisions,she says.They need to learn to fail and then pick themselves back up. Some of our students have never failed before they get here, and thats not good. Whether its a difficult class, or not passing a test, there are some who are extremely fragile. The notion that you can fail at something and still go on is an important part of growing up.

As she prepares for her departure, Kolman reminisces on the people shell miss (not to mention the fantastic view of campus from her corner office in theColeman-MorseBuilding), but says that, after three terms, its time to move on.

Im really pleased with whats been accomplished,she says.I think the program has moved in a good direction, and it just seems like the right time to go.

As for Kolmans future, she plans to take a year and, in the words of her soon-to-be former boss, Father Malloy,do what she wants to do.Shell remain inSouth Bendto cheer on the Irish football team for one more season, then will move toColumbus, where she may or may not take on a part-time occupation.

FYS will begin this fall with a new leader, Hugh Page, Walter Associate Professor of Theology. Kolman has no doubt that he, and the program, will continue to do great things for the first-year students of tomorrow, whoever they may be.