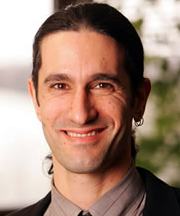 It is a widely accepted view in both research and popular literature: our ancient ancestors were hunters; aggressive, competitive and natural killers. ThisMan the Hunteridea has long influenced our understanding of human evolution, resulting in a focus on competition, aggression and even war.

However, new research by Agustin Fuentes, ONeill Associate Professor of Anthropology at the University of Notre Dame, and other leading anthropologists suggests that humans and other primates were more often prey than predators, a fact that greatly influenced the evolution of early man.

Based on the fossil evidence dating back 7 million years and studies in living primate species, Fuentes and others suggest that primates, including early humans, were the prey of many predators, including hyenas, cats and crocodiles. These predators were both more numerous (more than 10 times as many as today) and larger, with hyenas as big as bears and other mega-sized carnivores, reptiles and raptors.

Being on the menu for predatory beasts may have driven humans to evolve increased levels of cooperation, according to Fuentes.

Studies of human behavior in the social and biological sciences have tended to model the role of competition and the appearance of aggression, trying to explain why humans fight, go to war and otherwise engage in large-scale competitive contests,Fuentes said.However, predation played an important role in our evolution and humanity evolved more by helping each other than by fighting each other.

About 2 million years ago, humans suffered the same predation rates as other primates. Roughly 6 percent of most primates, then and now, are killed and eaten.

Then a change occurred in the fossil record,Fuentes said.Predation rates on other species went up while ours declined.

Fuentes argues that even before the development of language, humans were uniquely able to share the kind of second-hand information that could warn others where predators were lurking. At the same time, an increasing reliance on cooperative interactions in foraging, reproduction and general health maintenance emerged among early humans. All of these factors contributed to an emergence of social behavior in humans that made them harder targets for predators.

Fuentes notes that predation appears to be common in two different groups of humanlike species around 2.5 million years ago: Homo and Paranthropus .

By 1.5 million years ago, increased behavioral flexibility and cooperative interactions allowed for a successful evolutionary pattern in Homo ,Fuentes said. Paranthropus , it appears, could not adapt in these ways to the pressure of predation and became extinct between one and 1.2 million years ago.

One of the major events in human evolution may be our response to substantial predation pressure and our subsequent success altering selective environments.

Fuentes and Robert Sussman, Washington University, St, Louis; Karen Strier, University of Wisconsin; Douglas Fry, Abo Akademi University in Helsinki and the University of Arizona; and James Rilling, Emory University, outlined their work on predation at the American Association for the Advancement of Science annual meeting in St. Louis on Feb. 19.