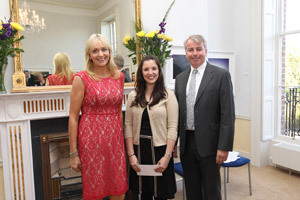 Nine Irish charities have each received a portion of the proceeds from “Notre Dame: A Welcome Home,” the pep rally held Aug. 31 in Dublin, Ireland, in association with the Emerald Isle Classic football game between Notre Dame and Navy, which was played Sept. 1 in Dublin’s Aviva Stadium.

A total of $154,000 was donated directly to the charities at an event held yesterday at O’Connell House, the home of the Keough-Naughton Notre Dame Centre in Dublin. The event was hosted by Irish television personality Miriam O’Callaghan, who also served as host of the pep rally, which treated the audience of 10,000 to a showcase of Irish and American traditions and musical performances in Dublin’s sold-out O2 Arena. (Watch pep rally video.)

The charitable organizations, each of which received $17,000, are the Aisling Project, the CSC Centre, Forbairt Naionrai Teoranta, the Foundation Project, Friends of the Elderly, the Life Centre, the Other Voice Project, Separated Children and Youth Horizons.

“The importance of the Irish diaspora really manifested itself so obviously over the weekend,” O’Callaghan told the Irish Times. “You hear about it, but then you see thousands of Americans visiting Ireland. They love us, they spend money and they’re a friend to us at a time when Ireland desperately needs friends.”

Tickets for the pep rally sold for $20 with the total cost of the event underwritten by the Glen Dimplex Group. One hundred percent of the event’s proceeds were donated to the charities, which were chosen to reflect Notre Dame’s community-based learning programs in Ireland.