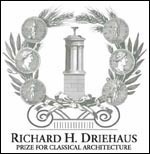 The first discussion is a conversation between 2009 Driehaus Prize recipient Abdel-Wahed El-Wakil and The New Yorker architecture critic Paul Goldberger. The second focuses on preservation and policy with Fabio Grementieri, an Argentine scholar and preservationist who received the accompanying 2009 Henry Hope Reed Award. Panelists include Adele Chatfield-Taylor, president of the American Academy in Rome, and Russell Keune, former director of international relations for the American Institute of Architects.

The 2009 Driehaus Prize was presented to El-Wakil, one of the leading voices in contemporary Islamic architecture and a practitioner known worldwide for his use of traditional form and technique, at the colloquium, which was held March 28 at the John B. Murphy Memorial Auditorium in Chicago.

The Driehaus Prize, which is administered by the Notre Dame School of Architecture, is awarded annually to an outstanding architect whose work applies the principles of classicism, including sensitivity to the historic continuum, the fostering of community, and consideration of the impact to the built and natural environment.

The Henry Hope Reed Award is given to an influential supporter of the classical architecture movement. Over the past ten years, Grementieri has served as the project manager of some of Buenos Aires’ most delicate and culturally significant architectural preservation projects, including the Palacio Bosch (United States Embassy), the Errázuriz Palace (National Museum of Decorative Arts) and the Pereda Palace (Brazilian Embassy).

Administered by Notre Dame, the annual $200,000 Driehaus Prize and $50,000 Henry Hope Reed Award represent the most significant recognition for classicism and traditional urbanism in the contemporary built environment.