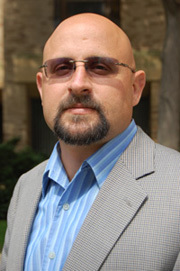 “The world of communications is rapidly expanding and changing,” said Todd Woodward, associate vice president for marketing communications. “Where once we made phone calls, sent press releases and relied on brochures, we now have social networking, video and digital communications.

“In just the last two to three years we have moved from e-mail, to text messaging, to YouTube, Facebook and Twitter. The fragmentation of our media and the ability for individuals to own their own content and choose their own sources require new ways of thinking and marketing communications skills. Don has lived in this world and we are excited to have him join us and lead the AgencyND team.”

Schindler has worked in digital media since 1999 and has led the digital marketing and advertising efforts of international and national clients, including RCA, ParaPRO, Keynote.org, Mars, Kimball Office, Riley Children’s Foundation and Indiana Tourism.

During his time with MediaSauce, Schindler was instrumental in developing and executing the “Digital Blueprint,” a digital strategic marketing plan based on emerging technologies, social networking and conversational advertising. He formerly served as a product marketing manager for RCA/Thomson and is co-editor of “The Social Media Bible.”

After serving for four years in the Navy aboard the U.S.S. Woodrow Wilson, Schindler earned his bachelor’s degree from the University of Missouri and his master’s degree in creative writing from Notre Dame.