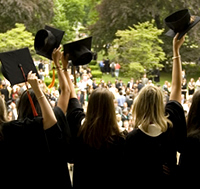 The University of Notre Dames 2007 graduating class can be defined collectively, through a variety of numerical and statistical observations, as well as individually, through the stories of students with compelling tales to tell.

Beyond the numbers, here are a few individual student stories of distinction:

Ted Brown,Kokomo,Ind.- In scholarship, sports and service, Brown has done it all. Working in the laboratory of Martin Tenniswood, professor of biological sciences, Brown has studied the linkage in mice between calcium in diet and prostate cancer. He also hasshadowedoncologist Rudolph Navari, director of Notre Dames WaltherCancerResearchCenter, director of the Indiana University School of MedicineSouth Bend(IUSMSB), and one of the nations leading experts on palliative care and doctor-patient relationships. The experiences have prepared him for medical school, which he will start in the fall across the street from the Notre Dame campus at IUSMSB. Captain this year of the Notre Dame swimming and diving team, Brown ranks second in program history with 10 all-conference honors. He helped the Irish to a runner-up finish at the Big East championship and was an integral part of the conference championship teams of 2005 and06. He was the teams Knute Rockne Student-Athlete of the Year, a recipient of the Kanaley Award – the most prestigious honor given to Irish student-athletes – and an NCAA post-graduate scholarship recipient. He also – somehow – found time to serve as assistant executive director of Irish Fighting for St. Jude ChildrensResearchHospitaland was a member of Student Governments Academic Affairs Committee.

p. _Ted can be contacted at tbrown5@nd.edu _

_
_ Jennifer Cimino, Omaha, Neb. - The singing ofNotre Dame, Our Mother,the Universitys alma mater, near the conclusion of Sundays Commencement ceremonies also will mark an ending for the woman chosen to lead the assembly in that song. Cimino is a member of the first graduating class from Notre Dames master of sacred music program. Established in 2005, the program prepares students for liturgical music ministry. It includes studies in music, liturgy and pastoral ministry, and offers a choice between organ or choral concentrations. Cimino was graduated fromSanta ClaraUniversityin 2004 with a degree in music and theater. She had already applied for admission to another Notre Dame graduate theology program when she learned about the new sacred music offering. She immediately requested that her application be shifted to the new program. During the course of her studies, Cimino concentrated on the classical musical pieces of artists such as Bach and Vivaldi which have sacred themes. She alsoserved as an assistant rector in Farley Hall and as a vocal coach for the Notre Dame Folk Choir. She will spend the summer working for the ND Vision vocation program before pursuing a parish liturgical position, preferably in theBostonarea.

_Jennifer can be contacted at jcimino@nd.edu _

_
_ Sheldon Dutes ,Orlando,Fla.- His college career has taken him places where most of his classmates never have been – or would hope to go. Through a Summer Service Learning Project facilitated by Notre Dames Center for Social Concerns, Dutes experienced homelessness first-hand the summer before his senior year, living and working among 25 homeless men for two months at the Shalom House in Kansas City, Kan.Through my poverty immersion, I gained invaluable perspective and insight, which has guided several aspects of my life,said Dutes, whose responsibilities at the Catholic Worker House included household chores, yard work, cooking and assisting the other guests. An American studies major who served as senior class president, Dutes also completed internships at television stations in South Bend and his native Orlando, contributed reports to Notre Dames student-produced NDtv News, and lent his talents as a news reader to campus radio station WSND-FM. Upon graduation, he plans to blend his penchant for service and passion for broadcasting as a production assistant and general assignment reporter at WNDU-TV, the NBC affiliate inSouth Bend.I am fascinated by televisions engaging capacity and I hope to use it as a vehicle for creating awareness about the injustices in our society,Dutes said.I hope to incorporate social responsibility into my career and am striving to be a voice for the voiceless.

p. Sheldon can be reached at sdutes@nd.edu .

_
_ Adam Fairholm ,Coral Springs,Fla.- Anyone who has turned on the television at Notre Dame, leafed through the student newspaper, or visited the Universitys Web site has probably seen a sampling of Fairholms work. Something of a communications pioneer, Fairholm, a film, television and theatre (FTT) major, has left an indelible mark on the student media landscape – on the airwaves, in print, and in cyberspace. He is executive director and one of the founding members of NDtv, Notre Dames student-produced television network that offers a variety of news, sports and entertainment programming to on-campus viewers. When Fairholm came on the scene as a sophomore, the network consisted of one bi-monthly cable access show produced by a dozen or so students. Today, the club is 80-plus members strong and provides a 24-hour line-up of five original shows, includingLate Night ND,of which Fairholm is executive producer. In addition to his endeavors in broadcasting, he also is the creator and artist behindCroissantWorld,a daily comic strip that has run since 2005 in the student newspaper The Observer. Last year, a 103-pageCroissantWorldbook containing 155 cartoons was published and made available for purchase at the Hammes Notre Dame Bookstore. On the Web, Fairholm provides a window into Notre Dames spiritual heart by providing a host of tranquil and affirming video clips of campus scenes for the Alumni Associations Pray at ND (pray.nd.edu), a new site that offers visitors daily prayers, inspiration and a chance to take in the Universitys beauty from near or afar. After graduation, Fairholm will follow his dream of working professionally in television, heading toChicagoto join Towers Productions as an associate producer.

p. Adam can be reached at afairhol@nd.edu .

_
_ Marie Lange,Brainerd,Minn.- From conducting cutting-edge research on malaria to working with underprivileged children inDublin, Langes years at Notre Dame mirror what the University hopes the undergraduate experience will be for all its students. Lange arrived at the University intending to major in engineering. During her sophomore year, her interests led her to switch to a major in biology and a minor in theology. Participation in the Notre Dame Dublin Program afforded her an opportunity to volunteer at a school for underprivileged children in the Irish capital. She assisted teachers with science and religious classes, coached soccer and began to consider theplight of children living in poverty. Upon her return to campus, Lange took a course on parasitology that raised her awareness of the many diseases afflicting children in developing countries. She began a malaria research project in the laboratory of Mary Ann McDowell, an assistant professor of biological sciences. Malaria is thought to inflict well over 500 million people and cause nearly 3 million deaths a year, more than 90 percent of which occur in infants and young children in sub-SaharanAfrica. Lange researched a molecule called IOD that is known to be unregulated during the malaria immune process. The molecule is thought to aid the malaria parasite in evasion and suppression of the hosts immune defenses. A member of the Notre Dame Folk Choir and Emmaus Faith Sharing Group, Lange also participated in Habitat for HumanitysShack City,the Turning Over a New Leaf community cleanup effort, and South Bend Memorial Hospitals HUGS pediatrics program. In keeping with her Notre Dame experience, she plans to attend medical school and study pediatrics.

p. _Marie can be reached at mlange@nd.edu _

_
_ Jonathan and Ryan Retartha,Naugatuck,Conn. The Retarthas have never appeared in an ad for Doublemint gum, and neither is the others evil alter ego that friends live in fear of encountering. As for the inevitable questions about how strange it must be to have an identical twin?Our response to that is: We dont know any different,Ryan says.That is our reality. Its not weird for us.Thats not to say theyre opposites, either. Both decided to pursue majors in the Department of Film, Television, and Theatre (FTT), with Ryan picking the theatre concentration and Jon focusing on film and television. And theyve both been tremendously successful. Earlier this year, Ryan, the recipient of FTTs 2007 Reginald Bain Award for Production of Remarkable Theatre Projects, became the first student in recent memory to serve as the technical director of an FTT play. Jon, who says he was thrilled when he found out film could be treatedwith the same academic rigor as any other subject,presented his paperonBen Hurand Cold War politics last October at a professional conference inNew Hampshire. He was the conferences only undergraduate presenter, speaking to an audience of faculty and graduate students. The co-winner of the 2007 Joseph P. OToole Award for Outstanding Graduating Film Student, he will start work toward a masters degree in cinema studies atNew YorkUniversitythis fall. Ryan will begin the master of fine arts program in technical design and production at Yale.We really are indebted to FTT,Ryan says.Its defined both of our careers here at Notre Dame, and it led to a very rewarding four years.

_
_ Katie Stuhldreher, Spring,Texas- An aspiring journalist, Stuhldreher already has put together an impressive reporting portfolio. She is especially interested in international affairs, as reflected by several internships and courses. Last summer she held a reporting internship on the foreign desk of the Washington Times, writing from D.C. on the G-8 Summit, the Saddam Hussein trial, theIrannuclear crisis and other world events. During the spring semester of her junior year, while engaged in a study abroad program inRussia, she also worked as a copy editor and political consultant for the Moscow News. In the summer of 2005, she participated in a foreign correspondence training course in theCzechRepublic, receiving instruction in international law, crisis reporting and war zone operations, and writing articles about counter-terrorism laws in the country. Closer to home, she has held internships at the South Bend Tribune and with Houston Community Newspapers, and has reported for the student newspaper The Observer. A Deans List student throughout her career, she majored in political science and Russian and was enrolled in the Gallivan Program in Journalism, Democracy and Ethics. She has received a Boren Fellowship toGeorgeWashingtonUniversityto study international security and Mandarin Chinese, and, upon completion of the two-year program, she will serve for two years in aU.S.national security agency as a part of herfellowship and then either continue in that line of work or transition back to journalism. If her name looks familiar, she is the grand niece of Harry Stuhldreher, one of Notre Dames famed Four Horsemen.

p. _Katie can be contacted at kstuhldr@nd.edu
_