The University of Notre Dame examined the presidential campaign through the lens of debates past and present during its 2016 Notre Dame Forum Wednesday night (Sept. 14).

The event, entitled “Debating our Future,” began at 7 p.m. in the Leighton Concert Hall of the DeBartolo Performing Arts Center, and featured a conversation among Janet Brown, executive director of the Commission on Presidential Debates; past debate moderators Jim Lehrer, former news anchor for PBS News Hour, and Bob Schieffer, CBS News journalist; and Dorothy Ridings, former president of the League of Women Voters. Their discussion was moderated by Notre Dame’s president, Rev. John I. Jenkins, C.S.C., who, with Lehrer and Ridings, serves on the Commission on Presidential Debates. 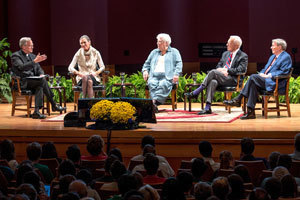 Brown and Ridings spoke of the history of televised presidential debates, beginning with the celebrated 1960 Kennedy-Nixon debates, all sponsored by the major television networks. Despite, or perhaps because of their impact on the 1960 election, presidential candidates preferred to avoid participation in such national events for the next three election cycles, and it was not until 1976 that a second series of televised presidential debates sponsored by the League of Women Voters was held during the general election campaign season. By the 1980 debates — among President Jimmy Carter, then former California Gov. Ronald Reagan and Illinois U.S. Rep. John Anderson — the League had added to the established criteria for debate participants what Ridings acknowledged was the “less than perfect” condition that they had the support of at least 15 percent of the nation’s voters in five respected, independent national polls. Observing that there are, at present, 1,800 Americans officially running for president, Ridings added, “If anyone has any better ideas, we’d certainly like to hear them.”

According to Brown, the Commission on Presidential Debates chooses as moderators “independent, smart and experienced journalists,” and allows them broad latitude in their roles. Lehrer, nicknamed the “Dean of Moderators,” agreed, observing that in his 12 turns as debate moderator “not one time did anyone from the Commission attempt to influence anything I did.” While applauding the increasingly loosened format rules that allow and even encourage candidates to address one another directly, Lehrer said that the moderator’s work has become increasingly difficult “because now you have candidates free to engage, free to ask questions, free not to shut up.”

Schieffer, speaking of the bemusing preparation a moderator must undergo, confessed that before he moderated his first debate — in 2004 between President George Bush and then Massachusetts Sen. John Kerry — he awoke one morning from a nightmare in which “I had asked my last prepared question for the debate, looked up from my notes at the clock and saw 20 minutes left.” After that he began preparing for debates by touring multiple Washington think tanks to interview a wide variety of policy experts, so much so that “I went into the last debate with some 300 questions prepared of which I wound up asking 12 or 13.”

“Voters are taking the measure of the individual and not just the individual’s views,” Lehrer said, and he and Schieffer both shared video clips of unguarded responses they thought were particularly important in debates they had moderated. Recalling how people who watched the 1960 debates on television thought that Kennedy had won, while radio listeners thought that Nixon was the victor, Lehrer cited as a “new and very important” development the “first formalized reaction shots” in the debates of 2000. For many people who watched Vice President Al Gore’s exasperated sighs as then Texas Gov. George W. Bush answered Lehrer’s questions, Bush won the debate. “The language of politics has as much to do with body as with words,” Lehrer said.

Observing that a crucial question for voters ought to be “Who would I be most comfortable with in time of crisis?” Schieffer said that a moderator should try “to give people a complete and better picture of who these people are, and let them see a different sides” of their characters. He shared a clip of a 2004 debate between Bush and Kerry in which he asked both men what they thought was the most important lesson they’d learned from the strong women they had married and from their two daughters as well. President Bush spoke jokingly at first, but then with obvious emotion about his love for his wife, and Kerry, after joking about “marrying up” to his very wealthy wife, spoke gratefully of her and his daughters and shared a memory of his mother’s deathbed. “I thought that gave the audience a chance to see a side of both these men that they might not otherwise see and also, by giving the audience a laugh, helped keep them awake” toward the end of a long debate.

Asked what one question each would ask if he were moderating the upcoming debates between Hillary Clinton and Donald Trump, Lehrer said that he couldn’t formulate one until the very day of the first debate. “This campaign has unique qualities, and the first question should reflect that, but who knows?”

Observing that both major parties have nominated candidates whom a majority of people “simply don’t like,” Schieffer proposed that both candidates be asked “‘Are their perceptions correct? Why do you think this has happened?’ That would be an interesting question to ask both candidates.”

The Commission on Presidential Debates will host presidential debates on Sept. 26, Oct. 9 and Oct. 19, and a vice presidential debate on Oct. 4, and all the Forum panelists exhorted the audience to pay close attention to them. “Televised debates are as sacred as the votes themselves,” Lehrer said. “Everybody sees these candidates in an environment that is clean and fair and serious. Informed voters are the people who run this country, and these debates are there to make you an informed voter.”

Established by Father Jenkins in 2005, the Notre Dame Forum has featured major talks by leading authorities on a wide array of complex issues, including immigration, sustainability, global health, the global marketplace, K-12 education and the role of faith in a pluralistic society.