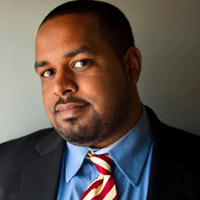 Joshua DuBois, executive director of the White House Office of Faith-Based and Neighborhood Partnerships, will speak on “Hope in Action Through Faith-Based Initiatives” at 7:30 p.m. Sept. 28 (Monday) in the Andrews Auditorium of the University of Notre Dame’s Geddes Hall.

DuBois’ lecture will concern the power of hope potentially emerging from the initiatives of communities of faith.

Born in Bar Harbor, Maine, but raised in Nashville, DuBois is the son of an African Methodist Episcopal pastor and is himself a Pentecostal minister. He was graduated from Boston University in 2003, earned a master’s degree in public affairs from Princeton University in 2005, and was enrolled in Georgetown University’s law school when he became a religious affairs advisor in the office of then-Sen. Barack Obama. He later became the religious affairs director for Sen. Obama’s presidential campaign, and was appointed to his present White House position in February.

DuBois’ lecture is sponsored by Notre Dame’s Center for Social Concerns and is open to the public.