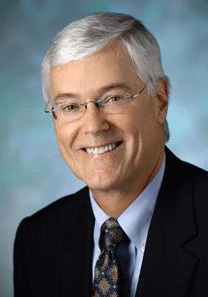 Thomas Quinn, M.D., director of the Johns Hopkins Center for Global Health, has been named the University of Notre Dame Graduate School’s Distinguished Alumnus for 2012 and will deliver the Commencement address at the Graduate School’s Commencement ceremony on May 19 (Saturday) at 10 a.m. in the Compton Family Ice Arena on the south edge of campus.

Quinn, who earned bachelor’s and master’s degrees from Notre Dame in 1969 and 1970, respectively, and his medical degree from Northwestern University School of Medicine, is renowned in the area of global health.

An elected member of the Institute of Medicine of the National Academy of Sciences and founding director of the John Hopkins’ Center for Global Health, he is the author of nearly 700 publications in his area of expertise: the epidemiology, pathogenesis, and clinical features of HIV/AIDS.

Quinn has been a key player in learning how HIV/AIDS spreads and who is at risk. He was one of the first researchers to investigate what was a new and mysterious disease in the 1980s. Using viral sequencing, he mapped the molecular evolution of the HIV epidemic, linking virologic changes to the spread of HIV and demonstrating the inherent pathogenesis of various HIV subtypes. He began his investigations in Haiti, then continued them in Africa, Asia and South America, continually producing much-needed information on how AIDS spreads among different peoples — working in 26 countries in all.

In addition to studying the spread of HIV/AIDS, Quinn has been committed to the implementation of clinical care programs for HIV and sexually transmitted diseases (STDs) in developing countries and was a co-founder of the Academic Alliance for AIDS Care and Prevention in Africa. He was one of the first researchers to demonstrate that non-invasive screening for STDs by use of molecular diagnostic assays could extend public health efforts to control STDs to non-clinic settings. This innovative approach, when coupled with his findings on the role of STDs as co-factors in enhancing HIV transmission, has led to one of the current basic tenets of the global AIDS control program.

Quinn and his team also demonstrated the key linkage in the viral dynamics of HIV with viral transmission from mothers to infants and between sexual partners. This landmark discovery led to the use of antiretroviral drugs to reduce viral levels in infected individuals which resulted in increased survival and decreased transmission. These studies eventually led to the recognition of treatment as one of the most important biomedical interventions to prevent the spread of HIV/AIDS worldwide.

In addition to his role as the founding director of the Johns Hopkins Center for Global Health, Quinn maintains appointments with the Johns Hopkins Bloomberg School of Public Health Departments of Epidemiology, International Health and Molecular Microbiology and Immunology, as well as appointments in the Johns Hopkins University’s Schools of Medicine and Nursing. He also serves as a senior investigator and head of the section on International HIV/STD Research and as associate director for International Research at NIAID. In the past, he served as advisor/consultant on HIV and STDs to the World Health Organization, UNAIDS, and the U.S. Food and Drug Administration.