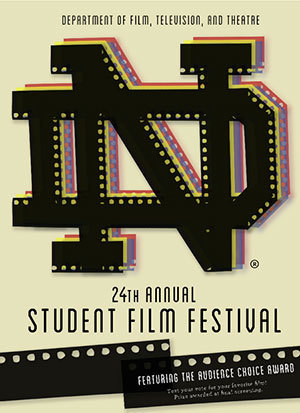 The 24th annual Notre Dame Student Film Festival, presented by the University’s Department of Film, Television, and Theatre, will take place Jan. 24 to 26 (Thursday to Saturday) in the Browning Cinema at the DeBartolo Performing Arts Center.

This year’s festival will feature the Audience Choice Award, a new honor in which audience members vote for their favorite film via text message during the first five screenings. The award will be presented to the student director(s) of the winning film before the final screening.

The festival screens films made in the past year by Notre Dame undergraduates as class projects. All entries were shot on location, mostly in the South Bend area, and feature local student and faculty actors. A number of films from the past two decades have gone on to compete in national film festivals.

Films are screened at 6:30 and 9:30 p.m. throughout the festival. Tickets are $7 for the general public, $6 for faculty and staff, $5 for seniors age 65 and older, and $4 for students. Tickets may be purchased online at performingarts.nd.edu, by phone at 574-631-2800 or at the performing arts center ticket office.

Additional student films will be available for online viewing only at ftt.nd.edu.