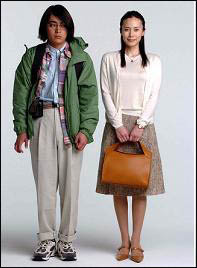 The University of Notre Dame will host filmmakers and scholars March 27 to 29 (Thursday to Saturday) for the annual Asian Film Festival and conference, this year titledLove at First Sight: Romance and Relationships in Asian and Asian American Cinema.

The festival will showcase four award-winning films in the Browning Cinema of the DeBartolo Center for the Performing Arts.

Admission is $6 for the general public, $5 for Notre Dame faculty and staff, $4 for seniors, and $3 for students.Tickets may be purchased in advance at http://performingarts.nd.edu or by calling the center box office at 574-631-2800.

Train Man— This 2005 film directed by Masanori Murakami is based on true events that took place on a popular bulletin board Web site in Japan.This is the fairy-tale story of one geek, one beauty, and 1,000 noisy chat room residents. (March 27 at 7 p.m.)

The Trouble with Romance- Directed by Gene Rhee, this 2007 film takes place in one Los Angeles hotel where each room hides a different trouble with romance. (March 28 at 7 p.m.)
My Sassy Girl- This 2001 film directed by Jae-young Kwak is based on an on-line serial written by Kim Ho-sik that details his relationship with his off-the-wall college girlfriend. (March 29 at 7 p.m.)

Omkara- Directed by Vishal Bharadwaj,Omkarais a film adaptation of William Shakespeares tragedy,Othello.This 2006 film traces one mans unrelenting jealousy and all-consuming obsession against the backdrop of political warfare in the interiors of Uttar Pradesh. (March 29 at 10 p.m.

The 2008 Asian and Asian American Film Festival is presented by the Center for Asian Studies, DeBartolo Center for the Performing Arts, East Asian Languages and Cultures, and the Provost Offices Asia Initiatives.It is sponsored and supported by more than a dozen departments, offices and organizations at Notre Dame and several external organizations, including the Korean Cultural Center in Los Angeles.