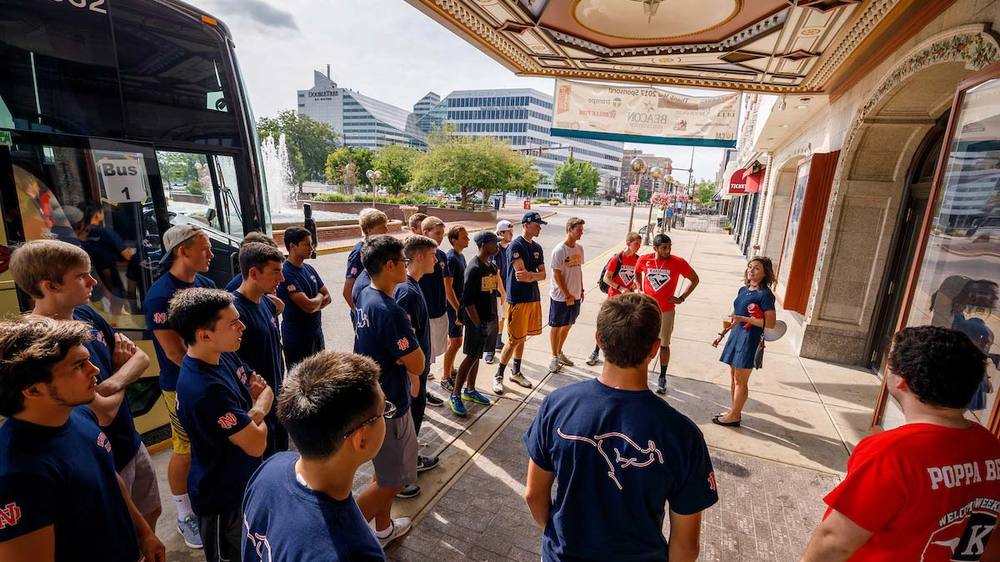 “I thought it was just cornfields out in Indiana,” said Paulsen. “So it’s nice to discover there’s more than that.”

Lined with old oaks and maples, California Avenue passes through the Near Northwest Neighborhood, which is among the oldest and most diverse in the city, populated by old Victorian mansions, sturdy “prairie boxes” and cozy bungalows, and home to a diverse mix of renters and homeowners, from aging widows on fixed incomes to low-wage factory workers, young professionals and tenured professors.

Led by Kathy Schuth, a 1999 Notre Dame graduate and executive director of the Near Northwest Neighborhood Inc., and Michael Hebbeler, NNN board president and director of discernment and advocacy for the Center for Social Concerns at Notre Dame, Paulsen and about two dozen other students toured the neighborhood Monday, Aug. 21, as part of Day of Community, a Welcome Weekend event aimed to exposing new and transfer students to the broader South Bend community.

Now in its second year, the event, led by the Division of Student Affairs in collaboration with the Center for Social Concerns and the Office of Public Affairs, introduces students to an assortment of businesses and nonprofits in the South Bend area, emphasizing service, education, arts and culture.

In doing so, it exposes them to life beyond campus and to opportunities for meaningful engagement with the community, from volunteer work to research and internships — both pre- and post-graduation.

The NNN’s mission involves improving access to affordable housing on the near northwest side through the rehabilitation of older homes, which it accomplishes in partnership with the city and federal government.

It’s also working with The Eck Institute for Global Health at Notre Dame, and a number of student volunteers, to quantify the lead problem in the neighborhood, where as many as 1 in 3 children have tested positive for lead at elevated levels in recent years because of contaminated paint and soil. 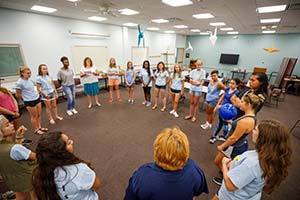 In addition to the Near Northwest Neighborhood itself, students toured the NNN’s offices on Portage Avenue, including The Local Cup, a volunteer-run coffee shop that operates on a “pay-it-forward” model that lets patrons decide how much to pay for things.

Speaking afterward, Hebbeler, who lives down the street from the NNN, invited the students to return to the neighborhood, about 15 minutes from campus by bike, for Arts Café, an annual open house in October, or Adopt-a-Block, an annual clean-up event in April — or just for coffee.

“I don’t know much about downtown South Bend,” said Rosta, “so I’m really excited that we got to come and look around.”

And that’s the point, according to Paul Manrique, director of new student engagement in the Division of Student Affairs.

“The original purpose of Day of Community was to break down barriers between Notre Dame and the city of South Bend,” said Manrique.

“As the newest members to this community, first-year Notre Dame students now have the opportunity to immerse themselves in the city, learn about the wonderful things happening around town, and find out ways to stay connected during their years at the University,” he said. “Feedback from students has been outstanding, and our 25 community partners have loved this chance to engage with Notre Dame in a new way.”

A total of 1,200 students participated in the event, which coincided with the solar eclipse.

Paulsen and others stopped to view the rare event near the end of their tour, gazing skyward as a temporary dusk settled on the city, setting crickets to chirping in the underbrush.

Earlier in the day, residents of Sorin and Knott halls toured the former Studebaker complex on the southern edge of downtown.

Working with the city and the state, Notre Dame graduate Kevin Smith, CEO of Global Access Point, is transforming the sprawling former auto assembly plant, the last remnant of the former Studebaker campus, into a mixed-use technology center.

A long two-story building, Building 113 remains under renovation but already houses four startups — all with ties to Notre Dame.

“What we would like to see in the next 10 years is this become the largest mixed-use technology center in the Midwest,” said Wiand, a 2012 graduate of Notre Dame’s ESTEEM entrepreneurship program.

Facebook founder Mark Zuckerberg toured the complex during a recent visit to South Bend, Wiand noted, meeting with Smith and others. He also visited the Local Cup.

“My dad went (to Notre Dame) and told me about the Studebaker factory, and I assumed there wasn’t really anything going on here at all,” said Goskowicz, an intended mechanical engineering major. “So it was cool to find out there were some tech startups and someone trying to rebuild stuff.”

Sejdinaj, with South Bend Code School, invited the students to engage with the local tech community.

“Everyone here will go have coffee with you,” he said, describing the friendly atmosphere within the community. “Everyone here is willing to connect you with other people.”