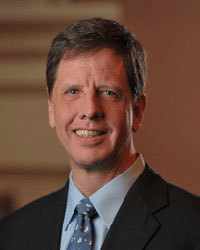 David Bailey has been appointed associate vice president for strategic planning at the University of Notre Dame, effective Oct. 1.

In his new role, Bailey will lead the Office of Strategic Planning and Institutional Research, which supports Notre Dame’s president in the development and drafting of the University’s overall strategic plan; assesses progress toward the University’s goals; maintains a central repository for college, school and division strategic plans; and administers departmental reviews for the provost and the executive vice president.

“David’s experience as a Notre Dame alumnus, his time in the office he will now head, and his long and distinguished career in business amply equip him for this critical position,” said Notre Dame president Rev. John I. Jenkins, C.S.C. “His appointment further strengthens the University’s advancement toward institutional excellence.”

Bailey, who has worked in the post on an interim basis since last year, graduated from Notre Dame in 1983 and earned an MBA degree from New York University’s Stern School of Business in 1997. He worked at the IBM Corporation from 1983 to 1998 as a client manager and systems engineer before joining Gerard Klauer Mattison & Co., a Wall Street firm where he worked as vice president and research analyst until 2002. Before returning to Notre Dame, he was a senior equity research analyst at Goldman Sachs from 2002 to 2010.

Bailey is married to Ann Chara Bailey, an architect, and they are the parents of twin sons, Jack and Ben.