Thank you so much. When I first came into the stadium, I heard a wonderful sound. It was the Concert Band. And I said to myself, "Why didn’t I bring the music I wrote for the Pope that was really for 21 brass?" These guys could really cut that. The reason I wrote it for 21 brass is we were honoring Pope John Paul II in the baseball stadium called Candlestick Park – 72,000 people. And I knew if I had violins and woodwinds, they wouldn’t be heard, but brass… man, you can hear the brass. 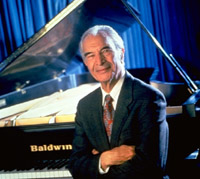 We were supposed to do my Mass with the Pope, but just before that was to start, they informed me that they wanted nine minutes of special music while the Pope came into the stadium in the popemobile. I said, "Well, where is the text?" And they said, “Upon this rock, I will build my church and the jaws of Hell cannot prevail against it.” And I said, “You want nine minutes on one sentence?” So I turned them down and went to bed and woke up and said, "I know how to do it. I’ll do it like Bach would have done it." You can use the same sentence over and over if you do a chorale and fugue, and thats what I did.

Now one of the most nervous days, outside of today, was that day. And all of the sudden, there was kind of a silence when 72,000 people weren’t buzzing and talking. And I looked up and the Pope was looking right at us in the orchestra, the brass. My conductor came over and sat by me on the piano bench and I said, "Did he bless us, or what?" He said, “I think he was learning to conduct in 4/4.” Well, it all went very well, but someday Id like to hear it here. It belongs here.

Now I had some kind of serious classical pieces to choose from to play the piano and I’m not going to play any of them. Because you people are going out into the world and you need a piece called “Travelin’ Blues.”