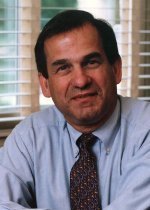 Daniel J. Saracino, assistant provost for enrollment at the University of Notre Dame, will retire from the University after 13 years as the leader of its undergraduate admissions office, effective June 30.

“Dan Saracino understands Notre Dame, loves Notre Dame, and through his hard work and wise decisions, has helped to make Notre Dame a stronger and better place,” said Thomas G. Burish, the University’s provost. “Under his leadership, the academic quality, diversity and service orientation of our students has steadily increased, while their commitment to the University and its special mission has continued unabated from prior generations of students. We are grateful to Dan not only for these results but also for the wise and principled way he has produced them.”

A national search will commence for Saracino’s successor. In the meantime, Robert Mundy will serve as interim director of admissions.

“It truly has been an honor to have served my alma mater these past 13 years,” Saracino said. “With a passionate and dedicated staff, we have all labored tirelessly to reach those outstanding young men and women who have indeed made this an even better Notre Dame. As an alumnus, I have no doubt that this special place will continue to grow.”

Under Saracino’s direction there has been a significant increase in the academic quality and diversity of Notre Dame’s applicants, admitted students and enrollees, all while maintaining the University’s longstanding and unchanging commitment to students who bring multiple talents to campus and value its mission as a Catholic institution of higher learning. The average SAT score of enrolled students at Notre Dame has increased from 1325 to 1410 during Saracino’s tenure, and diversity enrollment has improved from 14 percent to 23 percent.

“Dan has helped recruit an extraordinary student body to Notre Dame, individuals who have a passion for inquiry, are engaged by their faith, and generously use their gifts in service of humanity,” said Dennis C. Jacobs, vice president and associate provost. “By mobilizing enthusiastic alumni and a dedicated team of admissions professionals, Dan is responsible for annually attracting more than 14,000 accomplished applicants from all 50 states and from over 80 countries around the world.”

A Notre Dame alumnus, Saracino returned to his alma mater in 1997 after serving for the previous 20 years at Santa Clara University as director of admissions, dean of undergraduate admissions and dean of enrollment management.

After earning his bachelor’s degree in government and international relations in 1969, Saracino began his career in admissions at Notre Dame, where he served as assistant director from 1969 to 1975 and associate director from 1975 to 1977. He earned a master’s degree in education administration from the University in 1975.

Saracino has played leadership roles in numerous national professional organizations, including the College Board, Catholic College Admission Association, National Association for College Admission Counseling, Conference of Jesuit Admissions Directors, Association of Independent California Colleges and Universities, and the National Merit Scholarship and Lilly Foundation Scholarship Committees. He also has traveled extensively to international schools and military bases on behalf of the U.S. State Department and the Department of Defense.

Saracino and his wife, Marcia, are the parents of three children and three grandchildren. Their daughter Christina is a 1994 Notre Dame graduate, their daughter Gena was graduated in 1997 and their son Daniel graduated in 2002.