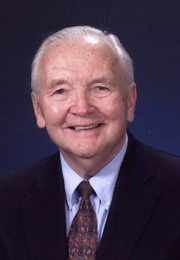 Michael J. Crowe, Reverend John J. Cavanaugh Professor Emeritus in the Humanities in the Program of Liberal Studies (PLS) at the University of Notre Dame, will receive the 2010 LeRoy E. Doggett Prize for Historical Astronomy from the American Astronomical Society (AAS).

The Doggett Prize is awarded biennially to an individual “whose long-term efforts and lifetime achievements have had significant impact on the field of the history of astronomy.”

Crowe, a 1958 Notre Dame alumnus who earned bachelor’s degrees both in the PLS and in science, earned a doctoral degree in the history of science from the University of Wisconsin in 1965.

In addition to having taught for nearly half a century at Notre Dame, where he has chaired the PLS and was founding chair of the graduate program in the history and philosophy of science, Crowe is the author of “Theories of the World from Antiquity to the Copernican Revolution,” “Modern Theories of the Universe from Herschel to Hubble,” and “Mechanics: From Aristotle to Einstein,” all of which have become texts widely used in college courses on the history of science.

He also is the author of “A History of Vector Analysis” and “The Extraterrestrial Life Debate, 1750-1900: The Idea of a Plurality of Worlds from Kant to Lowell,” which the AAS describes as a “magisterial and ambitious work” which has “opened up a new and rich field for scholarship and made the history of beliefs in alien life a legitimate field for discussion. It is an indispensable resource that is unlikely to be surpassed for a long time to come.” Crowe’s most recent book, “The Extraterrestrial Life Debate: Antiquity to 1915,” was published last year by the University of Notre Dame Press.

Praising Crowe as “a cultivator of scholars as well as scholarship” and citing his role in establishing the biennial Notre Dame Workshops for the History of Astronomy, the AAS said that the workshops “have become the premier gathering of historians of astronomy and done much to establish a sense of community among them. Crowe created a space in which scholars
of all ages and backgrounds could rub shoulders and share in convivial discussions of history-of-astronomy topics without regard to seniority or hierarchy. Indeed, many historians in the field have attributed their successful launch to the welcome, encouragement, and mutual support that they first received at one of these forums.”