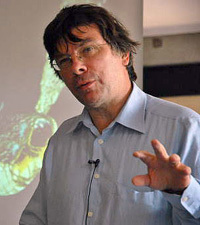 British paleontologist Simon Conway Morris will deliver a lecture titled “Darwin’s Compass: How Evolution Discovers the Song of Creation” at 8 p.m. Tuesday (Nov. 3) in the auditorium of the University of Notre Dame’s Jordan Hall of Science. The lecture is free and open to the public.

Conway Morris’ talk is the closing event of an international conference titled “Darwin in the 21st Century: Nature, Humanity and God” which was sponsored by the University’s Reilly Center for Science, Technology and Values, and the Pontifical Council for Culture’s Science, Theology, and the Ontological Quest (STOQ) Project in Rome.

Known as the foremost authority on the Cambrian Explosion, Conway Morris is a professor of evolutionary paleobiology in the Department of Earth Sciences at the University of Cambridge. He is renowned for his many debates with the late Stephen Jay Gould on the topic of the predictability of evolutionary history.

Conway Morris was elected a fellow of the Royal Society at age 39 and is the author of a number of books on evolution, including “The Crucible of Creation: The Burgess Shale and the Rise of Animals” and “Life’s Solution: Inevitable Humans in a Lonely Universe.” His research interests include the study of Burgess Shale-type faunas, the first appearance of skeletons and the Cambrian “explosion.” His interests extend to the science/religion debate and he is considered a highly effective communicator in the public understanding of science.

A reception sponsored by the University’s GLOBES (Global Linkages of Biology, the Environment, and Society) program will follow Conway Morris’ lecture in the galleria outside the Jordan Hall auditorium.