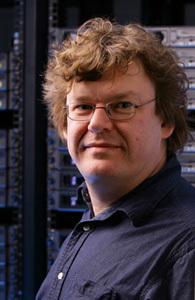 NUT midline carcinoma (NMC) is a cancer without a cure, and one that affects all age groups. NMC is a rapid-growth disease with an average survival time of four and a half months after diagnosis, making the development of clinical trials for potential therapies or cures for this cancer difficult, to say the least.

But difficult doesn’t mean impossible, and Olaf Wiest, professor of chemistry and biochemistry at the University of Notre Dame, is one of a group of collaborators studying the effects of a specific molecule (JQ1) on the trigger that controls the growth of this form of cancer.

Most people are familiar with genetics and the role they play in our height, hair color, and even predisposition to various diseases. “But there is this whole other world called epigenetics that controls which genes are expressed and which aren’t,” says Wiest.

This epigenetic world is made up of three classes of proteins: writers, erasers and readers, collectively the “instruction manual” that tells a gene when to activate and when to cease activation. Writers will create the instruction for the gene while erasers will remove instructions. Readers control the group and issue the start and stop commands for genes to use their instructions.

“The reason NMC is so aggressive is because these cancer cells divide very fast,” says Wiest. This rapid-growth is caused by the protein BRD4, an epigenetic reader that interacts with another protein called a histone. Their interaction changes the instructions for the gene and keeps the growth trigger permanently activated.

“The solution is that you have to block that protein,” Wiest says. “Which is something that is traditionally very difficult in protein-to-protein interactions because the binding between them is not very strong. Normally when you’re talking to somebody in chemistry and say you’re going to target a protein to protein interaction, they say ‘you’re nuts.’”

“Of course the way to prove them wrong is to go on and do it,” he concludes.

There is already a vast amount of information on writers and a lot of interest in erasers in the research community because there are two FDA approved drugs that control erasers. Research into epigenetic readers, however, is relatively new.

Wiest says it wasn’t such a big step for him and his 21 colleagues to move from erasers to readers in their studies. Their recent focus has been on a small molecule called JQ1 that tricks the NUT midline carcinoma cancer cells by disrupting the protein-to-protein interaction. It not only halts the constant growth command but it also makes the cancer cells “forget” their instructions and begin to resemble normal cells.

Wiest’s research showed that the protein is less flexible in the presence of JQ1, allowing it overcome the weak bindings. Animal studies produced very encouraging results. Laboratory mice transplanted with NMC cells from patients and given JQ1 lived, those that were not given JQ1 died.

Wiest’s hope is that through continued studies on the effectiveness of JQ1, an effective and non-invasive therapy can be found for NMC and other aggressive cancers.