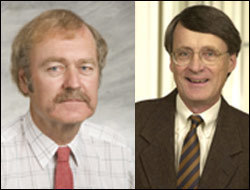 As the academic year begins, back-to-school advertising is barraging consumers. But they may not view the marketing efforts in as favorable light as intended, according to a long-term study by two marketing professors at the University of Notre Dame.

John Gaski and Michael Etzel of Notre Dame’s Mendoza College of Business have tracked consumer attitudes toward marketing every year since 1984 using a 20-item survey they created and administer in cooperation with the Synovate polling organization.

In general, the survey, known formally as the Index of Consumer Sentiment toward Marketing, indicates that while consumer sentiment toward the practice of marketing has trended upward over time, it has remained in negative territory for more than 20 years.

Because serving customers is marketing’s reason for being, the findings bring into question whether advertising and other efforts in general are consistently failing to identify or support consumer needs.

The reasons consumers feel negatively about marketing may be found in the individual marketing performance dimensions examined in the Etzel-Gaski project.Of those, only retail service is viewed as slightly positive by consumers, while performance related to product quality, prices and advertising continues to disappoint.

To be fair, consumer sentiment toward marketing has improved over the years. The index’s all-time low point came in 1984, coinciding with the aftermath of difficult economic conditions including a double-dip recession in the early ’80s, a stock market trough in 1982, high interest rates to combat inflation, and unprecedented – for that time – federal budget deficits.

An explanation of the Index of Consumer Sentiment toward Marketing was published in the March 2005 edition of the Journal of Consumer Research and is available at through the Journal’s Web site at
www.journals.uchicago.edu/JCR .