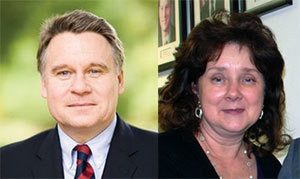 The occasion will be celebrated at a 5 p.m. Mass in the Basilica of the Sacred Heart. Archbishop Allen Vigneron of Detroit will be the presiding celebrant.

The Notre Dame Evangelium Vitae Medal honors individuals whose efforts have served to proclaim the Gospel of Life by steadfastly affirming and defending the sanctity of human life from its earliest stages. Previous recipients of the medal include Richard Doerflinger, associate director of the United States Conference of Catholic Bishops Secretariat for Pro-Life Activities; Helen M. Alvaré, associate professor of law at George Mason University; and Mother Agnes Mary Donovan and the Sisters of Life.

“In their work and in their persons, Congressman Chris and Marie Smith are extraordinary witnesses to the inalienable dignity and matchless worth of every member of the human family, born and unborn,” said Carter Snead, William P. and Hazel B. White Director of Notre Dame’s Center for Ethics and Culture. “One could not imagine more worthy recipients of the Notre Dame Evangelium Vitae Medal, the most significant and prestigious award for those whose lives have been devoted to building a culture of life. It is likewise fitting that Congressman and Mrs. Smith should receive this award at Notre Dame, an institution that proudly affirms the equal dignity of every human life from conception to natural death.”

Elected in 1980, Republican Chris Smith represents New Jersey’s 4th District. In addition to his service as a senior member on the House Committee on Foreign Affairs, Smith is co-chair of the bipartisan Pro-Life Caucus in the House of Representatives and the former executive director of the New Jersey Right to Life Committee. He is the author of the Stem Cell Therapeutic and Research Act of 2005, which established a nationwide program for research and medical treatment using umbilical cord blood and bone marrow cells.

He also is the author of the No Taxpayer Funding for Abortion Act, a legislative proposal for a comprehensive government-wide prohibition on taxpayer funding for elective abortion.

As director of PNCI, Marie Smith oversees the international operation of Gospel of Life Ministries, a nonpartisan organization that works with pro-life groups, lawmakers and religious leaders to advance respect for life in law and policy. Based in Washington, D.C., PNCI assists lawmakers and religious leaders from around the world in helping elected officials organize working groups in their legislatures to advance pro-life laws and build sustainable pro-life leadership in capitals around the world. She also has served as an observer for the Holy See and on Vatican delegations to various conferences at the United Nations and the Organization of American States.