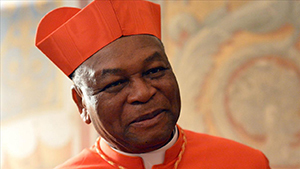 An interdisciplinary conference featuring a range of scholars including Cardinal John Onaiyekan, archbishop of Abuja, Nigeria, will explore the concept of human dignity against recent philosophical challenges. The conference, titled “The End of Human Dignity? Recovering the Intellectual Appeal of Human Dignity for the Theological and Philosophical Imagination,” will take place April 3-5 (Sunday-Tuesday) at the University of Notre Dame.

Cardinal Onaiyekan will open the conference at 7 p.m. April 3 by delivering the 2016 Human Dignity Lecture at McKenna Hall. The conference, which is free and open to the public, will feature noted philosophers and theologians including Cyril O’Regan, Leon Kass, Gustavo Gutiérrez and David Walsh.

Philosopher Ruth Macklin has claimed that the concept of human dignity is “useless,” denoting nothing more than respect of individual autonomy. Likewise, Harvard psychologist Steven Pinker has called human dignity “stupid” because it curbs “the modern conception of freedom.” ”The End of Dignity?” aims to rebuff such claims by considering the positive contribution that a society rooted in the inherent dignity of human persons offers.

“The erosion or outright dismissal of the concept of human dignity raises foundational questions about human persons and the communities we wish to inhabit,” said John Cavadini, McGrath-Cavadini Director of the Institute for Church Life. “What would society look like if the language of human dignity were eliminated from public discourse?”

The aim of the conference is to renew the discourse around the concept of human dignity by recovering its philosophical and theological foundations.

“Modern philosophies that fail to adequately deal with vulnerability and suffering obscure a conception of human dignity grounded in human encounter, the other, and the phenomenon of love,” said Cavadini.