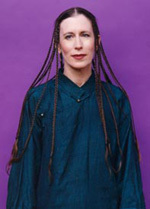 Composer Meredith Monk will contribute to an event co-hosted by the University of Notre Dame’s London Program April 27 (Monday) at 2 p.m. in the gallery of the program’s London Centre, 1 Suffolk Street, Trafalgar Square. The event will feature Monk’s work and mark the publication of new issues of the journals PAJ: a journal of Performance and Art, and Performance Research (PR). The event is presented in collaboration with Creative Research into Sound Art Practice (CRiSAP).

Monk is a multidisciplinary composer and performing artist whose incorporates music, theater and dance. Her musical works have been used by such filmmakers as the Coen Brothers and Jean-Luc Godard. She has influenced artists such as Bruce Nauman, and collaborated with others including Björk, Terry Riley, DJ Spooky, and John Zorn.

Monk has long been interested in art, music and spirituality, and in working with musical practices emerging within religious traditions. The new issue of PAJ contains an extended interview with her, and the new issue of PR, “Congregation,” takes its title from a discussion published in PAJ, in which Monk talked about the difference between working with an audience and working with a congregation. Each of the issues explores the relationship of contemporary art and performance to religious and spiritual practice, including essays on Marina Abramovic, Ann Hamilton and on Monk herself.

The event will include a panel discussion led by Professor Alan Read of Kings College London on the special issues of PAJ and Performance Research, and will be followed by an evening reception with contributions from composers and performers, including U.K.-based composer Jocelyn Pook, and singer Melanie Pappenheim.