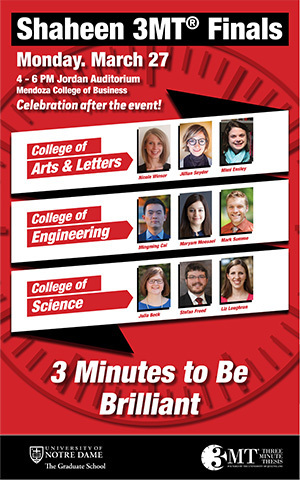 Nine University of Notre Dame graduate students will compete for prize money while attempting to explain their research in three minutes during the third annual Shaheen Three Minute Thesis competition on Monday (March 27). Known as 3MT, the goal of the competition is for Ph.D. students from Science, Engineering and Arts and Letters to cultivate the ability to explain their research, including both breadth and significance, in a language appropriate to an audience containing both specialists and non-specialists, all within three minutes.

Notre Dame’s 3MT finals will take place from 4 to 6 p.m. in the Jordan Auditorium in the Mendoza College of Business. A reception will follow the competition, which is free and open to the public.

The competitors will address a live audience and panel of judges with a single static slide accompanying their presentations. In addition to monetary prizes, the Notre Dame students are competing to claim a spot in the Midwestern Association of Graduate Schools 3MT regional competition in Indianapolis on April 7.

Judges for the competition are Laura Carlson, Notre Dame vice president, associate provost and dean of the Graduate School; Ann Firth, chief of staff, Office of the President; Jim Keenan, president of Walter & Keenan; and Ralf Bendlin, principal member of technical staff, 5G Radio Network Optimization, AT&T Labs. First- and second-place winners will be chosen by the judges, and those in attendance will vote for the “People’s Choice” winner.

Developed in 2008 by the University of Queensland in Australia, 3MT competitions have since been held in 19 countries and at more than 35 research universities in the United States.