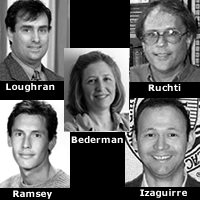 The undergraduate colleges of the University of Notre Dame have selected their outstanding teachers for the 2004-05 academic year.

Endowed by an anonymous donor, the award has been given annually since 1970 in memory of Rev. Charles C. Sheedy, C.S.C., former dean of the college.

Bedermans scholarly interest lie in the areas of gender, womens history and cultural history. The author ofManliness and Civilization: A Cultural History of Gender and Race in theUnited States, 1870-1917,she also was the recipient of the 1999 James A. Burns, C.S.C., Graduate School Award for excellence in graduate teaching, administration and mentorship. She has been a member of the Notre Dame faculty since 1992.

Ramsey focuses on the philosophies of cognitive science, the mind and science. He is the co-editor ofPhilosophy and ConnectionismandRethinking IntuitionHe also was the recipient of the 1999 Thomas P. Madden Award for Outstanding Teaching of Freshmen. He joined the Notre Dame faculty in 1989.

In theCollegeofScience, Randal C. Ruchti, professor of physics, has been chosen as the recipient of the Shilts/Leonard Teaching Award.

Ruchti joined the Notre Dame faculty in 1977 and specializes in particle physics, detector development and science education. He is involved with two major experiments: the D0 experiment at Fermilab and the CMS experiment at CERN,Geneva,Switzerland. He also is one of four principal investigators of a National Science Education project calledQuarkNet,which partners high school teachers and students with research physicists working at Fermilab and CERN.

Established in 1993, the Shilts/Leonard Award recognizes outstanding teaching in memory of Rev. James L. Shilts, a longtime Notre Dame astronomy and astrophysics professor who died in 1982. The award was endowed by Eugene T. Leonard, a surgeon and 1940 alumnus of the University.

In theCollegeofEngineering, Jesus A. Izaguirre, assistant professor of computer science and engineering, has been named Outstanding Teacher of the Year.

Izaguirres general research area is scientific computing, particularly modeling and simulation of biological materials, cells and organisms. He develops algorithms and high performance software for problems spanning the molecular, network and cellular levels of biocomplexity. He has been a member of the Notre Dame faculty since 1999.

In theMendozaCollegeof Business, Timothy Loughran, professor of finance, has been selected to receive the colleges undergraduate teaching award, which is sponsored by the British oil company BP. The recipient is chosen each year by the graduating class.

Loughran joined the Notre Dame faculty in 1999 and specializes in behavioral finance and market microstructure. He is the author of numerous journal articles on initial public offerings, equity offerings and other stock market topics.