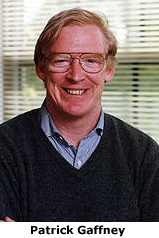 If you give me a million planets,one student argues,intelligence has to exist on one of them.

Welcome to a classroom debate about life on other planets. At this juncture, the optimiststhe believers in intelligent life in the universeare four; 11 others take the pessimistic view.

When the course started, notes Michael J. Crowe, emeritus professor in the Program of Liberal Studies, most of the students fell into the optimistic group.

By the end of the class, who knows?he says.

Crowes course on the extraterrestrial life debate is part of the College Seminar. Sophomores entering theCollegeofArtsand Letters are required to take one semester of the seminar, for which they can choose from among more than 30 different courses.

The goal of College Seminar is to consider big questions.This is a very big question, and one thats very cross-disciplinary,Crowe says.

Students consider readings from Aquinas to Mark Twain to Dostoevsky. What he hopes students learn, he says, is that theyre not going to get a final answer on the existence of extraterrestrial life.

Theyll see how you can take a hard question and bring hard evidence to it, without having a final solution,Crowe said.I think thats an important life lesson to learn.

The College Seminar program was created three years ago by a committee reviewing the old Sophomore Core Course, according to Rev. Patrick Gaffney, C.S.C., associate professor of anthropology and director of the program.

The College Seminar has four components. The first, of course, is that it must be a seminar.

Its a class that is built around interaction between participants based on common questions arising from a given text. Its not a class being taughtby the teacher,Father Gaffney says.

Another key is that the seminar be built around a great idea, with instructors choosing their own theme and developing a syllabus. Gaffney says what he looks for in a seminar is an idea with many sides to it and many possible interpretations.

In addition to the extraterrestrial life debate, this falls seminars include Father Gaffneys own course,Remembering the Dead,which looks at mortuary practices, funerals and memorial rituals that reflect particular beliefs about the soul. Other courses focus on reasons for poverty, tragedies of the Trojan War and varieties of mystical experienceincluding John Coltranes jazz classicA Love Supreme.

Seminars must include components of all three disciplines of theCollegeofArtsand Lettershumanities, social science and the fine and performing arts.

Students get a notion of Arts and Letters as a kingdom,Father Gaffney said.They can get to know what different majors are like.Courses also must also include agreat bookstext.

The notion was that these are books that have proven themselves over time to be works of genius,Father Gaffney says.Not knowing them not only impoverishes you, it cuts you off from people of knowledge. The seminar represents a commitment to the ideas that make you an educated person.

Two-thirds of the seminar grade is based on oral performance, and most courses have oral exams. The format is critical, Father Gaffney says, because even some bright students under-perform in interviews.

What Gaffney would like to see happen is for the College Seminar to become something more than another course studentshaveto take. He hopes theyll see it not just as another hurdle,but as a concept with its own identity and appealinteresting, energizing, and invitingthat will give them speaking skills they can use.

Hell know the seminars are successful, he says, when students want to take another one.