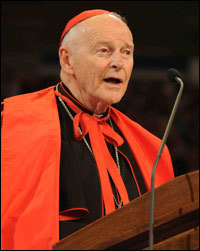 Setting forth the example of Blessed Basil Moreau, C.S.C., founder of the religious community that established the University of Notre Dame, Cardinal Theodore E. McCarrick encouraged the Universitys Class of 2008 to further Father Moreaus vision tomake our globalized world more human and more humane, more committed to the protection of life and dignity, of peace and justice, of faith and love,at the 163rd University Commencement Ceremony held Sunday (May 18) in the Joyce Center arena on campus.

Cardinal McCarrick , archbishop emeritus of Washington, D.C., was the principal speaker (watch video) and the recipient of an honorary doctor of laws degree at the ceremony, at which 1,980 new graduates received their diplomas.

For most people in our country, I would guess that Notre Dame is a combination of a number of great and wonderful things,Cardinal McCarrick said of the University.It is an outstanding house of studies, a true educational powerhouse, a center of scientific and sociological research, a welcome harbor for reflection and spiritual values, a place where learning and athletic excellence tend to go hand in hand, an ever-developing think tank for the nation and the world.

Notre Dame, indeed, is all those things,he added,but as a Catholic university, it is more.

More, he said, because Father Moreau, founder of the Congregation of Holy Cross who last year was beatified by the Church, wanted it that way.

Blessed Basil found it most important that education be filled with hope,Cardinal McCarrick said.Constantly he would talk of his priests and brothers as those who had cause to be men with hope to bring, those who could make God known, loved and served, for therein is the promise we are called to live.He wanted an institution that was excellent. He would suffer no compromise with excellence.

As a former actingPresident of the United States, I now have the best of both worlds – a successful administration and a Notre Dame degree,said Sheen, who played a soulful American president who was a Notre Dame graduate on NBC’s widely acclaimed television series "The West Wing.

One of the most satisfying aspects of The West Wingwas portraying a Notre Dame graduate,Sheen said.I thought Jed Bartlett was as close as I was going to come until now.

A self-described Catholic peace activist, opponent of abortion and student of Catholic social teaching, Sheen spoke of his commitment to service, sayingacting is what I do for a living; activism is what I do to stay alive.

I learned early that you serve yourself best when you serve others first,he continued.Whether we acknowledge it or not, we are all responsible for each other and the world. We are all beneficiaries of divine promise. We are not asked to do great things; we are asked to do all things with great love.

At the conclusion of his address, University Provost Thomas G. Burish presented Sheen with a Notre Dame jacket identical to the one he wore in his finalWest Wingepisode,with the expectation youll wear it in your next television series.

Telling his classmates,God didnt put us here to be ordinary,Hammack harkened back to Notre Dames early days in urging his fellow graduates to dare to be different – to bejust crazy enough to change the world.

Just imagine coming to America to found a university with only 300 dollars in your pocket,Hammack said, referring to Rev. Edward F. Sorin, C.S.C., the French priest who, sent to America by Father Moreau, founded Notre Dame in 1842.

Many would call that crazy, and many would argue that founding a long-lasting institution with so little is impossible, but Father Sorin would disagree. And, through this University, he continues to change the world today, not only in those who attend Notre Dame, but also in all the people we touch.

Wonderful things will be expected of us simply because of our association with this great University,Hammack said.But we cant be satisfied with mere expectations. We cant be content defining ourselves in terms of what others think. We are here precisely because were crazy enough to continuously ask more of ourselves. Weve demanded more than anyone else has even imagined. Now, its time to be daring. Its time to spark the changes that today seem impossible, time to make the world see that, at Notre Dame, with God as your guide and the Blessed Mother at your side, all things are possible.

What we say of Blessed Basil, we must be able to say of Notre Dame,Cardinal McCarrick said in his concluding remarks of Father Moreau, who he called abrilliant educator, zealous missionary, prudent leader and meticulous administrator.