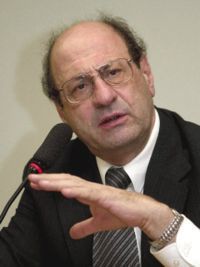 José Zalaquett, professor of human rights at the University of Chile’s Law School, will be awarded the 2009 Notre Dame Prize for distinguished public service in Latin America at a ceremony Nov. 12 (Thursday) in Santiago.

Established in 2000 by the University of Notre Dame’s Kellogg Institute for International Studies and funded by The Coca-Cola Foundation, the Notre Dame Prize recognizes the efforts of visionary leaders to enhance the region’s welfare. It is the only award of its kind to recognize the efforts of civic activists and intellectuals as well as leaders in business, religion, government or the media to enhance the region’s welfare.

The award carries a $15,000 cash prize, with a matching amount donated to a charitable organization recommended by the laureate. The 2009 matching prize will be presented to the University of Chile’s Center for Human Rights.

Zalaquett will be honored for the vital role he played in defending human rights in Chile in the immediate aftermath of the 1973 coup and for the significant leadership he has provided to both victims and those concerned about human rights around the world in the years since. Taking the experience of Chile to the rest of the world, he became a key founder and nurturer of the international human rights community.

“For decades Zalaquett has been an inspiration to so many of us who have worked for human rights in Latin America,” said Paolo Carozza, a current member of the Inter-American Commission on Human Rights and a Notre Dame associate professor of law and Kellogg Institute faculty fellow.

“His combination of practical engagement and intellectual reflection are a model of what is needed in human rights work today. He has been at the forefront of a whole series of issues, diagnosing with foresight what the pressing needs of the continent are, and bringing intelligence and wisdom to bear on them.”

Hailed as “a founder of the modern human rights movement worldwide” by Kerry Kennedy Cuomo, Zalaquett, already a prominent lawyer and professor, was thrust into the human rights arena after the Sept. 11, 1973, military coup that overthrew Chile’s democratically elected government.

Zalaquett organized and headed the legal department of Comité de Coopercación Para La Paz (or Comité Pro Paz), an ecumenical organization sponsored by the Catholic Church. Later renamed the Vicaría de la Solidaridad, the organization became known as one of the most visible opponents of the state policy of terror. Zalaquett was imprisoned for his work and forced to leave Chile in 1976.
During 10 years of exile, he served in various positions with Amnesty International, including chairman of the International Executive Committee. He is widely credited with helping the organization to become one of the foremost human rights organizations in the world.

In 1990, in newly democratic Chile, President Patricio Aylwin (later the 2001 winner of the Notre Dame Prize) appointed Zalaquett to the National Commission for Truth and Reconciliation, also known as the Rettig Commission. Zalaquett played a central role in framing the issues facing the commission, which has been drawn upon extensively by other countries grappling with transitions to democracy. From 1999 to 2000, he was a member of the “Mesa de Diálogo sobre Derechos Humanos,” a government-sponsored roundtable discussion of human rights issues in Chile.

As co-director of the Center for Human Rights at the University of Chile, Zalaquett has trained a new generation of human rights advocates for Latin America, in particular through a highly competitive “Diploma de Postítulo” course on democratic governance. Offered in conjunction with the International Center for Transitional Justice, the course draws professionals from across Latin America and a diverse array of fields.

The recipient of a MacArthur Foundation Fellowship (the so-called “genius award” given to creative people in a range of fields), the UNESCO Prize for Human Rights Education, among many others, Zalaquett holds honorary degrees from Notre Dame and City University of New York.

The Kellogg Institute brings comparative social science inquiry to bear on international issues relevant to contemporary society. The institute’s approach to scholarship and teaching is grounded in an appreciation for the benefits that democratization, economic development and organized civil society may bring to citizens around the world. Known for its expertise on Latin America, Kellogg has in recent years broadened its focus to Africa, Asia and beyond.