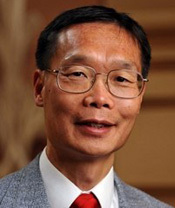 Danny Z. Chen, professor of computer science and engineering, at the University of Notre Dame, will be recognized as the 2009 James A. Burns, C.S.C., Graduate School Award winner during the school’s Commencement ceremony Saturday (May 16) at 10 a.m. in the Joyce Center.

The award is given annually to a faculty member for distinction in graduate teaching or other exemplary contributions to graduate education.

“Through his contributions as a scholar, research adviser and teacher, Danny Chen has been a driving force in the department’s development into a thriving, well-funded, externally recognized Ph.D. program,” said Kevin Bowyer, Schubmehl-Prein Chair of Computer Science and Engineering.

Chen earned his doctorate in computer science at Purdue University in 1992 and joined the Notre Dame faculty that same year. He has published in several important areas, including robot path planning, VLSI design and parallel algorithms.

Chen is best known, however, as a leader in an emerging area of research known as computational medicine. He has received world-wide recognition for pioneering work in this area using computational geometry techniques to solve algorithmic problems arising in medical applications, such as radiation cancer therapy and medical imaging.

Chen has published nearly 200 papers in selective peer-reviewed journals and conference proceedings, holds five patents and has won 20 research awards from the National Science Foundation (including an NSF Career Award), the National Institutes of Health and various industry groups. He also has been a visiting researcher at the Max Planck Institute in Germany, the Academia Sinica in Taiwan and the Hong Kong University of Science and Technology.

Chen is regarded as an excellent teacher and graduate student mentor and was the recipient of a 2004 Kaneb Teaching Award. His 12 doctoral students have built first-rate careers — his first currently is a Lockheed Martin senior fellow and another works at the NASA Jet Propulsion Lab. Three of his former students are tenured professors at the University of Texas, the State University of New York at Buffalo and the University of Iowa, and two others are in tenure track positions. Two other students have received prestigious NSF CAREER Awards.

Father Burns was the first Notre Dame president with an advanced degree, a doctorate from Catholic University, and he was the leading reformer of Catholic education in the United States in the first quarter of the 20th century. One of his most significant accomplishments was to raise Notre Dame’s academic standards by recruiting faculty with doctoral degrees.