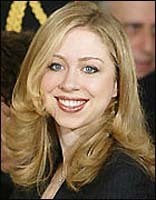 Chelsea Clinton, the daughter of Democratic presidential candidate Sen. Hillary Clinton, will participate in a question-and-answer session from 10:30 a.m. to noon Wednesday (March 26) at Legends restaurant at the University of Notre Dame. She will be joined on campus by the actor Sean Astin.

For the first time in 40 years, voters in Indiana will have the opportunity to participate more fully in the presidential nomination process,Father Jenkins said.Given this unusual circumstance, we took the opportunity to invite all three candidates or their representatives to campus to speak directly to students, faculty and staff about the important issues being debated in the primaries and, eventually, the general election campaign.

A college campus should be a place where there is serious and thoughtful discussion, and perhaps no more so than when our nation is examining the credentials of the political candidates who seek to lead us. We, of course, are not endorsing any particular point of view, but, rather, hope that the direct engagement with presidential candidates and campaigns will inspire our students to become active participants in the political process as informed voters and community leaders.

The Clinton campaign was the first to accept the Universitys invitation and will send the candidates 28-year-old daughter, who has been speaking at a variety of events nationwide in support of her mothers candidacy. She and her father, former President Clinton, appeared together Monday in South Bend.

Beginning in 1952, Notre Dame has issued invitations to the presidential and vice presidential candidates of each party to give the campus and community a firsthand impression of them and their messages. That year, both Dwight Eisenhower and his Democratic opponent, Adlai Stevenson, spoke at the University. Other candidates who have spoken include Richard Nixon, Henry Cabot Lodge, William Miller (a Notre Dame alumnus), Jimmy Carter, George H.W. Bush, Bill Clinton and Joe Lieberman.

Father Jenkins plans to continue the tradition of inviting the major party candidates to Notre Dame to speak on substantive issues during the general election campaign.