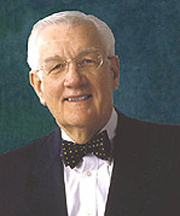 C. William Pollard, chairman emeritus of the ServiceMaster Company, will receive the Theodore M. Hesburgh Award for Ethics in Business on April 14 (Wednesday) from the University of Notre Dame’s Institute for Ethical Business Worldwide and Center for Ethics and Religious Values in Business.p. Named in honor of Notre Dame’s president emeritus, Rev. Theodore M. Hesburgh, C.S.C., the award will be presented at 4 p.m. in the Jordan Auditorium of the Mendoza College of Business. The ceremony, which is free and open to the public, will include talks by Pollard and Joseph Maciariello, Horton Professor of Management at Claremont Graduate University, as part of the college’s Frank Cahill Lecture Series.p. Pollard joined ServiceMaster in 1977 and twice served as chief executive officer, first from 1983 to 1993, a time during which the company’s customer level revenues grew from $234 million to $6.4 billion, and also from July 1999 to January 2001. He was the company’s chairman of the board from 1990 to 2002 and continues to serve as an advisor.p. ServiceMaster provides outsourcing services to more than 10.5 million customers in the United States and 41 countries worldwide, and is the parent corporation for companies such as TruGreen-ChemLawn, Terminix and Merry Maids. Under Pollard’s leadership, ServiceMaster was recognized as the No. 1 service firm in the Fortune 500 and was cited as one of the magazine’s most admired companies.p. Pollard was graduated from Wheaton College and the Northwestern University School of Law. He practiced law from 1963 to 1972, specializing in corporate finance and tax, and served on the faculty and as a vice president at Wheaton from 1972 to 1977.p. Pollard is the author of the best-selling book “The Soul of the Firm” and has contributed to other books and magazines. He is co-chair and a director of UnumProvident Corp. and a director of Herman Miller Inc. He also serves on the boards of Central DuPage Health, Wheaton College, The Leader to Leader Institute, and the Billy Graham Evangelistic Association.p. Maciariello specializes in the application of Judeo-Christian values to the practice of management. His lecture is titled “Management Practices at the ServiceMaster Company and the Drucker Tradition.”p. The Cahill Lecture Series at Notre Dame was established by the family of 1959 University alumnus and benefactor Frank Cahill to honor his memory and commitment to ethical behavior and integrity.p.