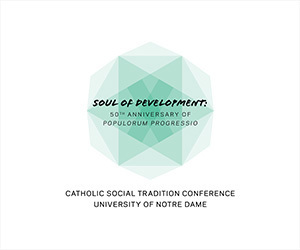 The University of Notre Dame’s Center for Social Concerns will hold its biennial Catholic social tradition conference on March 23-25 at McKenna Hall. This year’s conference, “The Soul of Development: 50th Anniversary of Populorum Progressio,” will bring together more than 80 international scholars and practitioners of Catholic social tradition to discuss the central themes of Pope Paul VI’s 1967 encyclical, Populorum Progressio (On the Development of Peoples).

The encyclical was important in the late 1960s for calling attention to the increasing marginalization of the poor in the developing world. Since then, it has provided the basis for the Catholic Church’s integral approach to human development. Pope Paul VI wrote in the encyclical that “development cannot be limited to mere economic growth. In order to be authentic, it must be complete: integral, that is, it has to promote the good of every person and of all humanity.”

“The center has hosted the Catholic social tradition conference every other year since 2011, and it continues to grow both in size and importance,” said Rev. Paul Kollman, C.S.C., Leo and Arlene Hawk Director of the Center for Social Concerns. “Populorum Progressio is a seminal document; we’re looking forward to the productive conversation it will generate.”

The conference will open Thursday evening with an original musical performance by a Notre Dame student ensemble. During the course of the three days, there will be five keynote addresses, more than 50 colloquium presentations and five workshops discussing the influence of the encyclical — and addressing themes such as economic justice, international development, solidarity with the poor, peace-building and globalization.

“This biennial conference remains one of the few events that gathers the best minds and practitioners of the Catholic social tradition so that the University of Notre Dame can be a place of engaged thinking with the Church,” said Bill Purcell, associate director of Catholic social tradition and practice at the Center for Social Concerns and organizer of the conference.